Following in the tradition of the Queen’s Silver and Golden Jubilees, commemorative events were held throughout the country.  There was no large organised parish event in Badsey but instead, various smaller groups held celebrations.  The celebrations at Wickhamford suffered because of the rain.

A special church service was held on the morning of Sunday 3rd June in St James’ Church, Badsey.

At Wickhamford, the residents planned a picnic lunch on the Recreation Ground on Sunday 3rd June.  Unfortunately it was cold and wet.  The weather was unseasonably cold and it rained for most of the afternoon, causing the abandoning of many planned outdoor games.  In a rare break in the rain, the under 4s took part in a short race which was one of the few outdoor events, organised by Mrs Anne Poulter, to get under way.

Despite the inclement weather around 300 people attended the celebrations and the children participated in face-painting, cup cake decoration and other events which took place in the Clubhouse and marquees.  The WI provided free tea and coffee, and the Badsey Society had a display of village celebrations from bygone years.  Many watched the River Pageant on the Thames on a large screen in the bar of the Clubhouse.

Almost one hundred specially commissioned Jubilee mugs were presented as part of gift packs given to all of the children who came to the celebration.

On Monday 4th June, Badsey’s Jigsaw Club from St James’ Church held a Diamond Jubilee “Bring and Share” picnic at the Scout Hut on the Recreation Ground from 12 noon until 4 pm.  The Hut was decorated with red, white and blue balloons.  Music from the 1960s was played and home baking was provided.  In a welcome change from Sunday, it was warm and the sun was shining so most people decided to sit outside on the grass and make use of the picnic tables.  The event, at which around 50 people were present, was organised by Wendy Morrey.

On Tuesday 5th June, Mary Dore and Mike & Wendy Neale, with the help of Committee members from Badsey Friendship Club, organised a street party on Seward Road.  Tables and chairs were set out along the road which was adorned with flags and bunting, music played and all had a wonderful time.  People had been busy baking cakes and royal-looking flans and buns and much food and drink was consumed.  Many people wore fancy dress and red, white and blue was everywhere.  There was apple bobbing, face painting, long rope skipping and various other games, with the adults joining in the skipping and the “dressing up” game.  The rain fell in the afternoon but, in good spirit, the celebrations carried on.

Badsey was unable to arrange for the Red Arrows to fly past over Seward Road as they were doing a fly past over Buckingham Palace, so instead the Red Sparrows flew past on their mobility scooters.  A report appeared in the July issue of Community News:

Residents and friends were delighted when an appearance of the Red Sparrows roared into the street to the musical strains of “The Dambusters”.  The formation, led by Group Captain Wendy Neale and her intrepid crew, roared down the runway in the famous arrow formation doing a roll at the end of the runway and returning with flags flying, their distinctive red wings outstretched and very broad smiles.  This intrepid group risked bad weather conditions for this very dangerous but exciting display much to the delight and appreciation of the spectators. 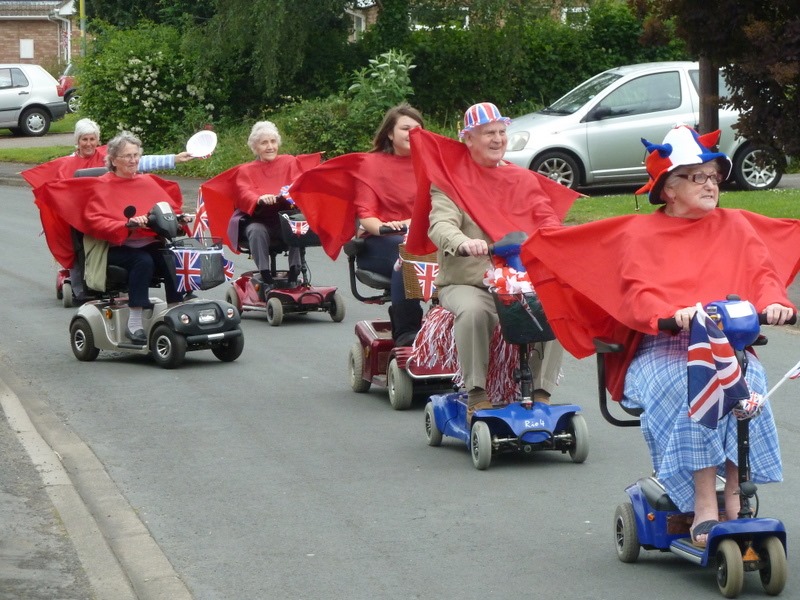 Badsey Brownies joined over a thousand other Brownies and Guides at Three Counties Showground, Malvern, to celebrate the Queen’s Diamond Jubilee.

New Testament given to school children 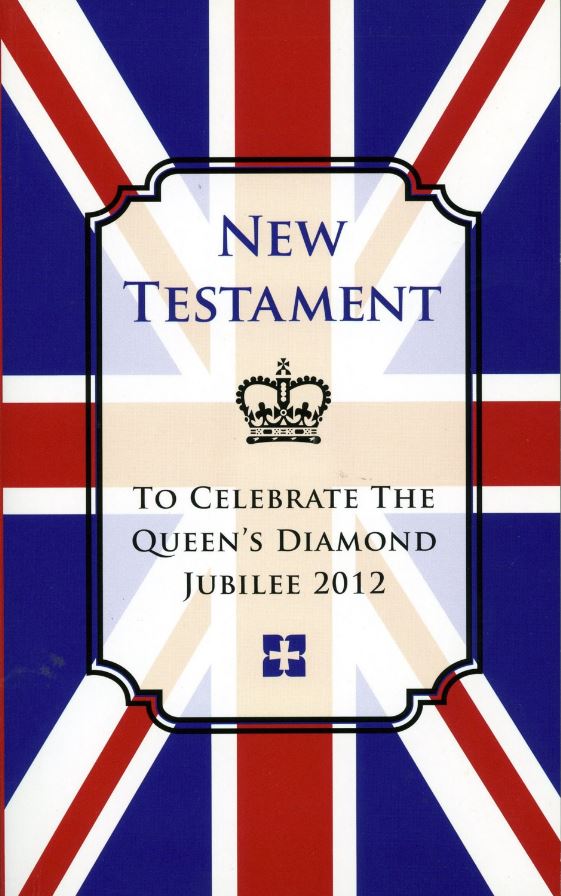 A paperback copy of the New Testament (New International Version) was donated by the church to pupils, staff and friends of Badsey First School to mark Queen Elizabeth's Diamond Jubilee.  The text on the back cover says:

A Bible was given to The Queen at Her Majesty’s Coronation.  It was described as the world’s most valuable gift.  The churches in this land are giving you this gift to mark Her Majesty’s Diamond Jubilee.