The Battle of Cuckoo Bridge 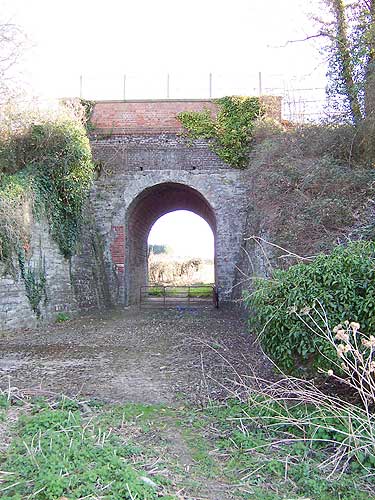 Brian Smith's poem is about a railway bridge and the difficulty of deciding what it is called.

Here is more information about the bridge, with a map, so you can go and wonder at it.

Aldington meadows leads to the railway line.
A way underneath? Yes, follow the sign
To the bridge, Cuckoo High or Cuckoo Eye?
A bone of contention, and here is why.

The bridge, causing disputes among the minions,
Creating controversy and difference of opinions
Is in the embankment (made by the Railway Co),
Raising the track over the brook below.

This embankment cut farming land in two
And footpath users could not get through,
So an arch in the bank was created
Its name in dispute as previously stated.

Farm labourers, toiling within its sight
Would have coined the name, and well they might
Have solved the matter once and for all,
But long since they have answered Heaven's call.

The band practiced here, out of hearing range,
As venues go this one was strange.
No recent occupation - save
For when the police broke up an illegal rave.

The 'Cuckoo High Bridge' brigade
Base their argument (quite well made)
Upon the arches' exceptional height;
A double decker could pass, headroom not tight.
So they go on to explain
That locals drop aitches (that much is plain!)
So, the 'High' then became 'igh
Wrongly interpreted as 'Eye'.

There is a completely different point of view.
Opponents, who number quite a few,
Say that it is definitely 'Cuckoo Eye'
And then go on to explain why.

Now, let the case for the 'Cuckoo Eye' be heard.
They maintain here, the cuckoo was a common bird.
Country folk used natural names, what's more
They produced examples by the score.
Long before any trains came hurtling by,
That field was known as 'Cuckoo Eye'.
So the field name transferred to the bridge,
Engineered into the man-made ridge.

Which of these explanations rings most true?
Which do you favour of the two?
I can't reveal which one I favour
Or this rhyme would have a biased flavour!

No written record can be found
And as there is no common ground
The two sides have not been reconciled.
A final verdict, then, cannot be filed.

It is donkey's years since this all started,
Since when old men have now departed.
This has dragged on for far too long,
Each side claiming the other's version wrong.

Interested parties could all do the same
And adopt 'Cuckoo Bridge' as the official name.
To end this squabble we should all try,
All in favour - please say 'eye'! (Or 'igh).

Brian Smith's poems on the theme 'Back Home to Badsey'