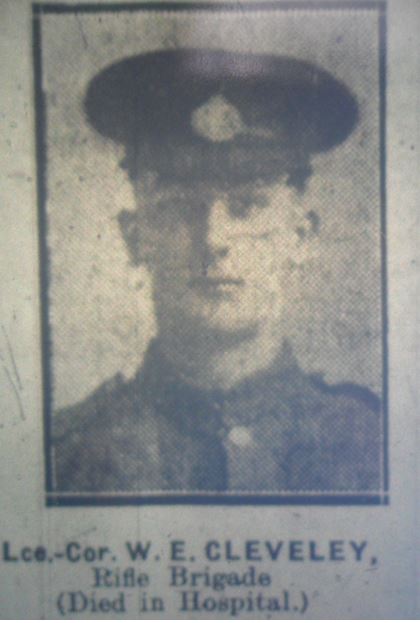 William Edward Cleveley was Badsey born and bred.  Corporal Cleveley’s name is recorded on the war memorial in St James’ Church, Badsey, and at Badsey School.

William was a pupil at Badsey School until May 1912.  His father was a market gardener, so it is likely that he worked for him on leaving school.

William enlisted with the Rifle Brigade in 1915, when he was still only 15.  He went out to France in January 1916.  He was buried by a shell and narrowly escaped with his life, and then was wounded in the fighting on the Somme in August of the same year.  He was on a list of 34 soldiers who was sent a parcel from the Badsey Soldiers’ Fund, but he would not have received it as he was by then convalescent at Shurland, Kent.  As the Magazine said:  “A few soldiers were in hospital when the parcels arrived, in which case the contents were as a rule distributed among friends in their respective companies.”

On 31st December 1917, William Cleveley died and his death was reported in the January 1918 Parish Magazine:

With the passing of the Old Year came news of the death in the service of his country of Cpl W E Cleveley.  Cpl Cleveley, who was only 18 years of age, enlisted quite early in the war when he was only 15…..  He had suffered for years from an infection of the ear and the old trouble, accentuated no doubt by his wounds, necessitated an operation as the only possible means of relief.  All efforts to save his life were, however, unavailing and he passed away at the Horton War Hospital, Epsom, on Dec 31st.  He was a most promising soldier, and at the time he was taken ill was on a course at the Training School for NCOs at Hertford.

William Cleveley’s body was brought back to Badsey and the funeral took place on 4th January, which was reported as follows:

By the courtesy of Major Pollexfen, a firing party from the prisoners’ guard at Evesham was in attendance.  The firing party, under Sergt Major Perry, marched to the deceased’s home, and, augmented by local members of the VTC, acted as an escort, the coffin being, of course, covered with the Union Jack.  The body was met at the churchyard gate by the vicar and choir and the service was fully choral.  Before the congregation left the church the organist played the “Dead March” and, as the body was borne from the church to the grave, members of the VTC lined the path.  At the conclusion of the Burial Office three volleys were fired over the grave and a bugler from Norton Barracks sounded the “Last Post”, after which a hymn was sung and the vicar pronounced the benediction.

The whole ceremony – the slow march through the village with arms reversed, the service in church and at the graveside, the touching strains of the “Last Post” so suggestive of both a farewell and a welcome – was very impressive and was attended by a large number of friends and sympathisers.

In April 1918 it was noted that the Military Authorities had erected a temporary cross over the grave of William, similar to those placed over soldiers’ graves at the front.

William’s parents had now lost a fifth child.  His grieving parents remained living at Cotswold View until Edward died in 1934 and Jane in 1952.  Edward’s sister, May, married Thomas Brotherton and remained in the area.  His other sister, Ivy, remained in Badsey until her death in 1959.