Lieutenant-Commander James Sholto Douglas is recorded on the war memorial in St James’ Church, Badsey, St Silas the Martyr, Kentish Town, and in St Peter’s Church, Chester.  There is also a stained glass window in memory of the family in Chester Cathedral.

James was educated at a prep school on Somers Road, Malvern, where he was at the time of the 1901 census.  It is not known which school James attended after this, but it was not Malvern College.  After school, James joined the Navy as a midshipman.  James’ naval career began well, being described as “zealous and willing, should make a good officer”.  He served first on “Britannia” from 15th May 1904 to 15th September 1905, then on “Irresistible” from 15th September 1905 to 13th September 1909.  During this period, James’ father, Charles, died at Chester in March 1908 leaving over £32,000.

In December 1908, following a medical examination, James was granted permission to enter King Edward VII Hospital for a slight operation at his own expense, which he did so on 19th January 1909.  On 9th February 1909 he entered a Convalescent Home; he was re-examined on 10th March and declared fit.  James failed his seamanship exam in March 1909 as he said that he was not physically fit to undergo an examination so soon after a long illness.  He applied for remission of the penalty, but this was refused.  He was told to present himself for re-examination in July 1909 and this time he passed.  He had recently been appointed Acting Sub-Lieutenant.

James transferred to “Hindustan” on 29th September 1909 and remained there until discharge.  James took his Part I exam in September 1909 but failed.  He had further attempts in January 1910 and April 1910 but again failed.  By this time, comments about his progress were not so favourable:  “Has plenty of ability but does not show any zeal in learning his profession” and “Shows zeal and ability but is somewhat careless”.  After the third failure, he was removed from the Navy List on 14th May 1910.  James appealed, but this was refused a week later.  The Naval records note that Mrs Douglas then also appealed and asked that the case of her son might be reconsidered.  She was informed that the authorities were unable to accede to this request.

After leaving the Navy, James had to find a new career for himself and it seems that at this point he turned towards the church.  In 1911, James, then aged 22, was living at Westbury-on-Severn, Gloucestershire, lodging in the home of widow Clara Brazington, and employed as a parish worker.  Also boarding there was Owen Dudley who was a Clerk in Holy Orders.  James’ widowed mother, Jane, still lived at St Martin’s House, Chester, in 1911 with Dorothy and Henry and four servants.

It may have been soon after this that James moved to Kentish Town, London, to be a parish worker at St Silas the Martyr.  He certainly had connections with the church as his name appears on a brass plaque in the church as one who died in the First World War.  Mission work had begun in this impoverished area of Kentish Town in 1877 and a church built in the 1880s.  A new church opened for worship in 1912 which was uncompromisingly Anglo-Catholic and this was probably the period in his life when James embraced Anglo-Catholicism.

James moved to Badsey at about the end of 1913 to take charge of St Benedict Boys’ Home.  The previous year, the Reverend John Ludlow Lopes, a clergyman from Birmingham, had opened a boys’ home at Badsey Manor House.  Reverend Lopes was an Anglo-Catholic who later converted to Roman Catholicism.  He later acquired The Stone House (now known as Badsey Hall) and opened another home in the village.  Younger boys were at The Stone House, which he renamed St Christopher’s, and older boys were at Badsey Manor House, which he renamed St Benedict’s.  James was certainly living in Badsey in December 1913 as he was shown as the guardian of William Barwood of Badsey Manor House who started at Badsey Council School.  The March 1914 Parish Magazine noted that “Mr J S Douglas of the Manor House is Secretary and Collector-in-Chief for Badsey”; this was for raising funds for the new Warwickshire Bishopric fund.

On the outbreak of war, James Sholto Douglas, as a member of the Royal Naval Volunteer Reserve, was called up.  The London Gazette of 28th August 1914 records that he was commissioned Temporary Lieutenant.

James was with Hawke Battalion at the Defence of Antwerp in 1914.  Hawke Battalion was part of 1st Brigade, Royal Naval Division founded by the First Lord of the Admiralty, Winston Spencer Churchill, in late August 1914.  In October 1914 a large number of men of Hawke Battalion were either captured by the Germans or crossed into Holland and interned for the duration, as they retreated from Antwerp.

The Parish Magazine of November 1914 reported as follows:

Lieut Douglas appears to have had an exciting time with the Naval Brigade in Antwerp, where he was in command of a machine-gun section.  He made the personal acquaintance of the now famous trenches and was apparently one of the last to leave the city, “dodging shells and falling houses” in the progress through it.  But for his resourcefulness, which enabled him to reach Ostend in safety, he would probably now be interned in Holland instead of being luminously housed at the Crystal Palace.

In November 1914, James applied to transfer to the Armoured Car Section, but this was refused.  On 24th December 1914 James was appointed Temporary Lieutenant-Commander.  Interestingly, Apsley Cherry Garrard, who travelled in 1912 with Scott on his ill-fated venture to the Antarctic, and who wrote the book, “The Worst Journey in the World”, appears in the same list.

On 1st May 1915 James was appointed to HMS "Excellent" pending being transferred to Sea-service.  He was then attached to RNAS Longship Airship Station, Aberdeen.

Some time in 1916, James fell sick and was invalided home on 9th November 1916.  He died at his home in Chester of tubercular meningitis on 18th December 1916.  The Parish Magazine of January 1917 records his death:

It is with very deep regret that we chronicle the death of Lt-Commander James Sholto Douglas, late of Badsey Manor House, at the comparatively early age of 27.  As our readers will remember, he volunteered for service with the Navy immediately on the outbreak of war, and was gazetted Lieutenant in the RNVR after an interview with the First Lord of the Admiralty.  He went to Antwerp in command of a machine-gun section, and only escaped internment by his courage and resourcefulness.  When we last referred to him in these columns he was stationed with the Naval Brigade at the Crystal Palace.  He was subsequently attached to the RNAS as armament officer and was for some time at Dunquerque, taking up an appointment as Lieut-Commander near Aberdeen in October last.  In November he began to suffer very much from very severe headaches and was sent home to Chester.  He rapidly became much worse; and was unconscious almost continuously to the time of his death.  A few days before his death he had very slight conscious intervals; he recognised his mother and asked for one of his brothers, and on one occasion felt for his crucifix under his pillow and looked at it.  He passed away on Monday morning, Dec 18th, and on Tuesday his body was taken into the Lady Chapel of Chester Cathedral where it remained until the funeral on Wednesday.  There was a Requiem on Wednesday morning, a watch having been kept all Tuesday night by relations and friends.  The following tribute from his brother seems to describe the man just as we knew him.

I thank Thee, God, for his life here,

For all his graces, all his ways so dear.

Soul of all company,

Bright with the love of men because of God;

Strong in the love of God for other men.

The Sacramental way on earth he trod,

And now his earthly body’s dead – well, then, 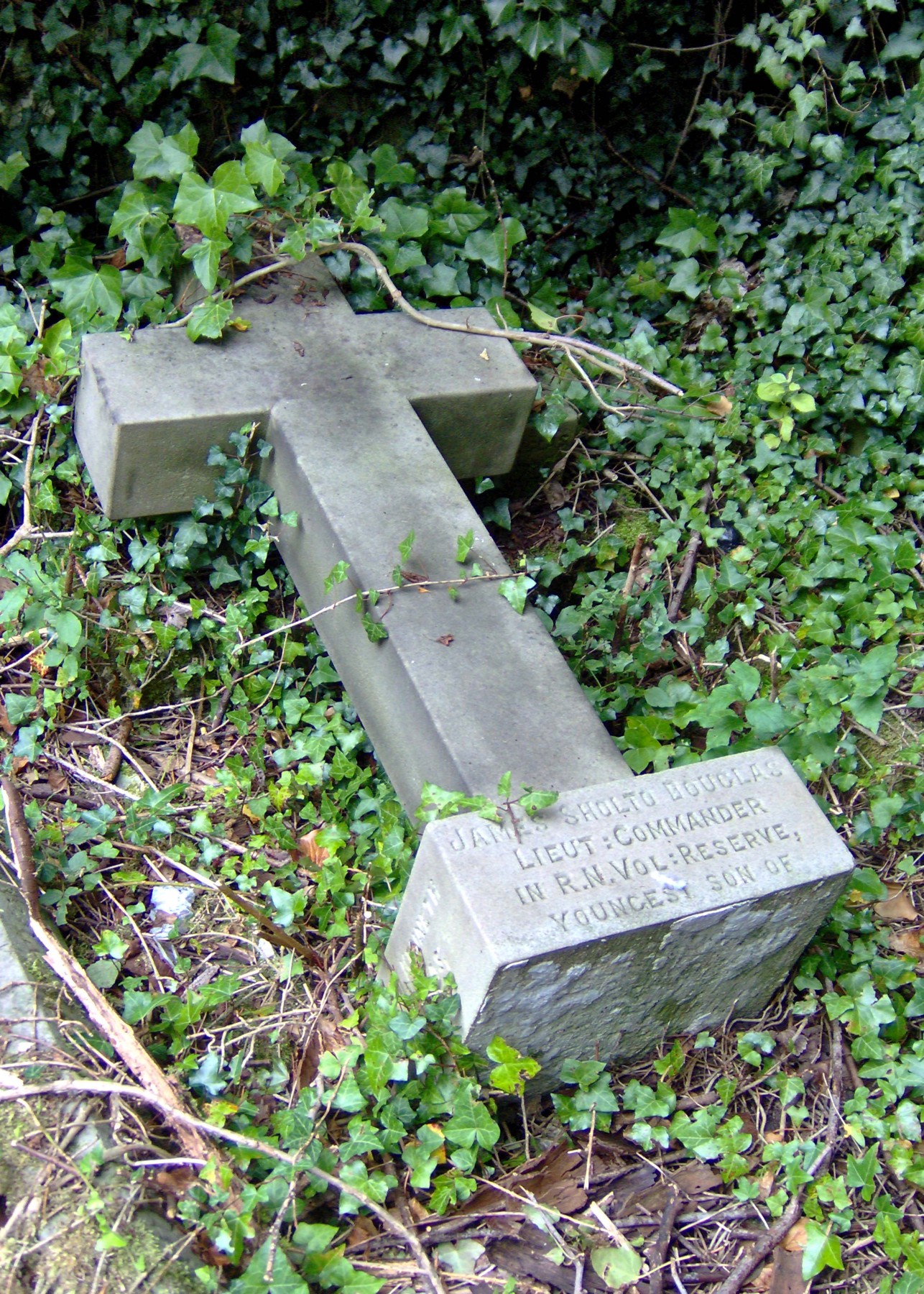 James Sholto Douglas was buried in Chester (Overleigh) Cemetery. A private memorial was erected in the form of a cross with vases and curbs, © The War Graves Photographic Project. 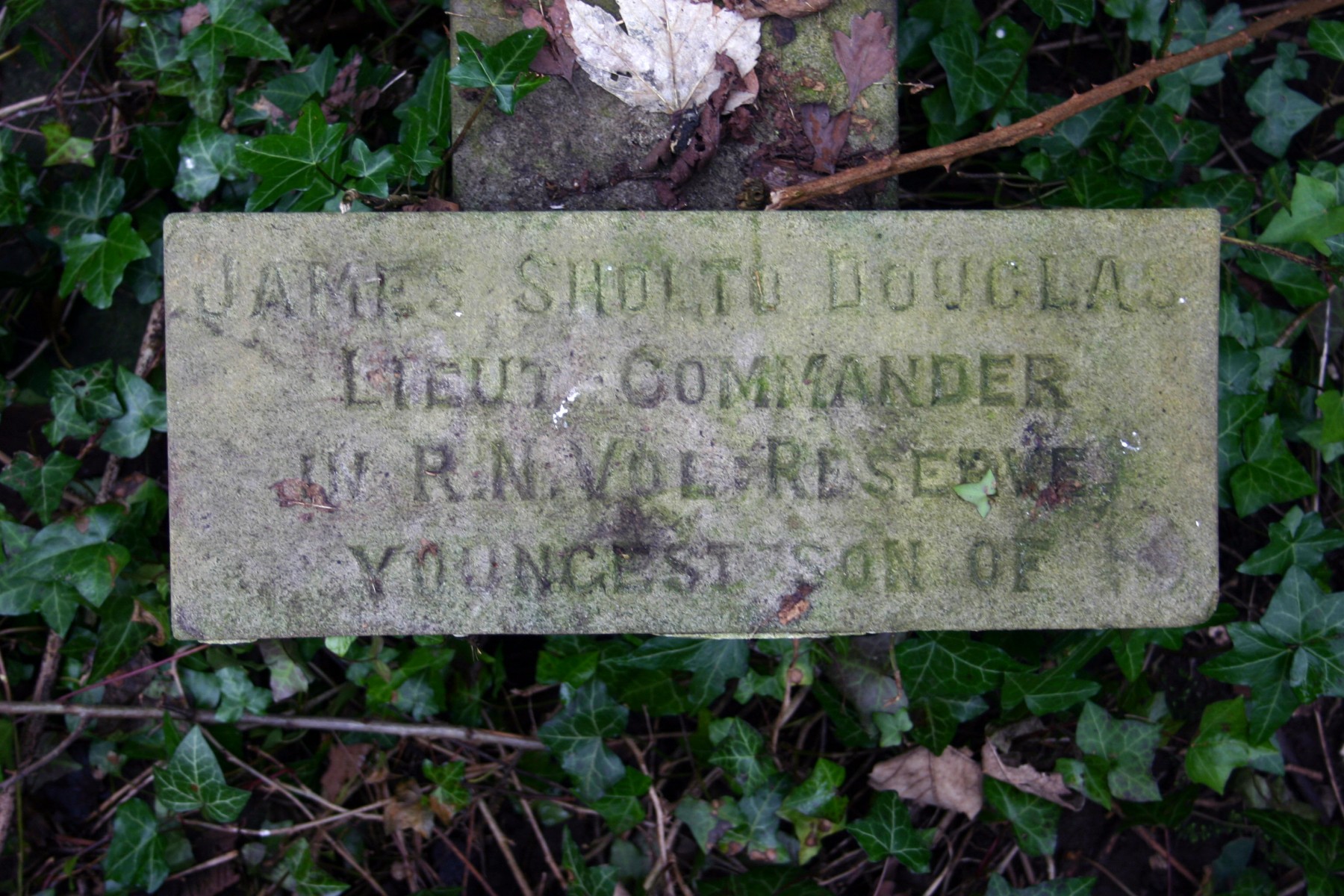 James Sholto Douglas' 1914 Star and other medals were issued to his mother, Mrs Jane Douglas.

The Douglas family appear to have been ill-fated.  Whilst Charles and Jane Douglas lived to the ages of 67 and 76 respectively, their children were not so fortunate.  All died before their time and Jane Douglas had to endure the loss of three children before her death in 1919 (as well as James’ death in 1917, a baby daughter, Helen, had died in 1884, and John, the eldest son, had died in New Zealand in 1914).  Just 12 days after his mother’s death, 33-year-old Henry who, like James, had been a Lieutenant-Commander in the Royal Naval Volunteer Reserve, also died.  Robert Douglas died in Switzerland in 1921 and Charles Douglas died in 1929.  The last sibling to die was Dorothy Mary, the first-born, who remained a spinster and died at Chester in 1930, aged 55.