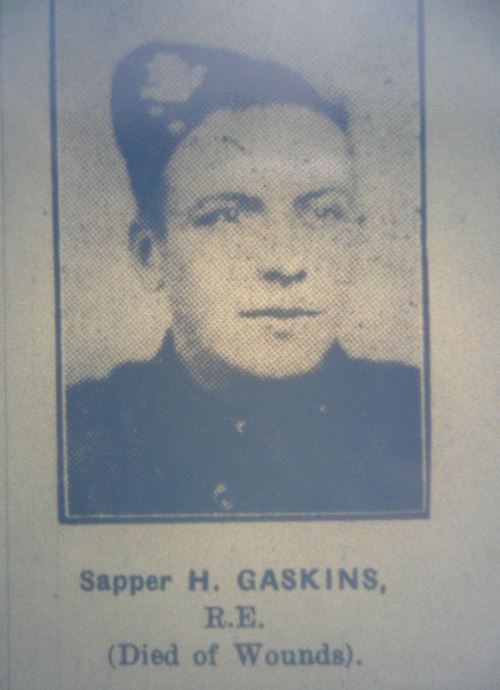 Sapper Harold Gaskin (or Gaskins as the family’s name was more generally known) was born in Manchester but his mother’s family, the Brooks, had lived in Aldington or Badsey since the late 1840s; Harold himself grew up in Badsey following the death of his mother.  Sapper Gaskin’s name is recorded on the war memorial in St James’ Church, Badsey, and at Badsey School.

Harold Gaskin was born at Manchester on 9th February 1889, the only surviving child of Henry (or Charles Watts Henry as he was often known) and Maria Gaskin.  His birth was registered as Gaskins, and that was the spelling used by the family in Manchester, but it seems that in Badsey the spelling was always given as Gaskin.  He was baptised at St Benedict, Ardwick, Manchester, on 9th May 1889.

Maria gave birth to another son, William Obadiah, the following year, but both mother and baby died.  Just a few months after the death of Maria, Henry married again, this time to Mary Brooks who was Maria’s younger sister.  He had married Maria in the name of Charles Watts Henry Gaskins and married Mary in the name of Henry Gaskins.  It would be interesting to see whether he indicated whether he was a widower or a bachelor.  It was not until the 1907 Marriage Act that it was permitted for a man to marry his deceased wife’s sister which was one of the forbidden partners for marriage as stated in The Book of Common Prayer of 1662.

Where young Harold was in 1891 is not known; his father and new wife, Mary, were living alone in Manchester.  But, from the summer of 1892, Harold was living in Badsey whilst his father and step-mother established a new family in Manchester (11 children were born between 1891 and 1913, four of whom died in infancy).  Harold was admitted to Badsey School in August 1892, aged just three; his grandmother, Mary Brooks, was listed as his guardian.  He spent his childhood in Badsey, and is recorded in the 1901 and 1911 census as living with his grandmother and maiden aunt, Sarah Anne, at Silk Mill Cottages.  On leaving school, Harold became a market gardener’s labourer in Badsey.

In September 1912, Harold’s elderly grandmother, Mary Brooks, died at the age of 85.  Presumably he remained living with his Aunt, Sarah Anne Brooks, at Silk Mill Cottages.

Harold enlisted early in the war as a Sapper in the Royal Engineers.  He arrived in Egypt on 14th March 1915.  The Badsey Parish Magazine of August 1915 reported that he had been slightly wounded.  Harold died of wounds on 2nd December 1915.  The Parish Magazine of April 1916 said that he had died in hospital at Alexandria, but this seems unlikely as he was buried in Ari Burnu Cemetery, Anzac, Turkey.

The Commonwealth War Graves Commission gives Harold’s parents as Henry and Mary Gaskins of 33 Bolton Street, Hyde Road, Gorton, Manchester, and he was described as a market gardener of Badsey.  Mary was actually his step-mother and aunt rather than his mother.  Details of headstone schedules on the Commonwealth War Graves website reveal that Harold’s father requested that the words “Gone but not forgotten” should be added to the headstone.