Chris Smith of Badsey has written the following article about his great-uncle, Ernest William Knight Marshall, who died aged 22yrs on 16th March 1915 after being wounded at the battle of Neuve Chappelle in the Artois region of France.  Ernest’s name is recorded on the war memorial in St James’ Church, Badsey, and at Badsey School. 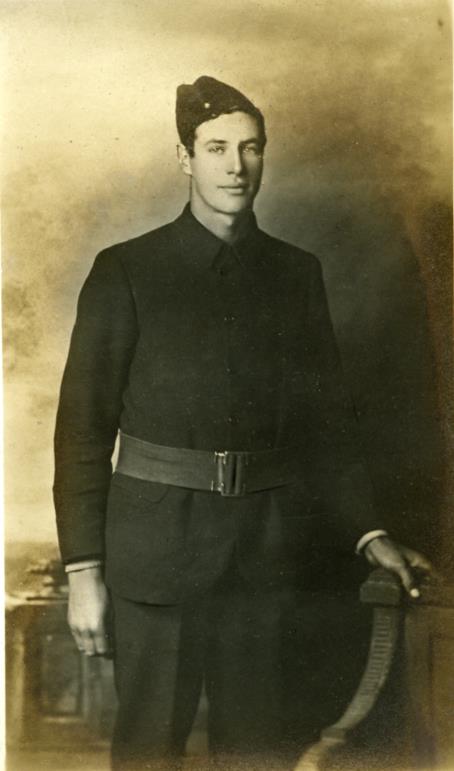 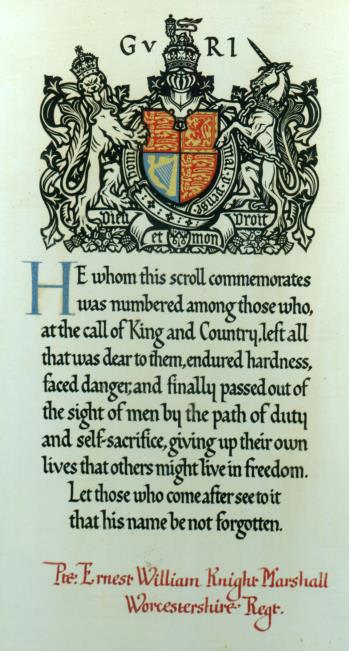 When I returned to live in my family home after my parents died I came across Ernest’s photo in one of the drawers. In other places around the house I discovered a photo of a cemetery and three simple white wooden crosses each with three numbers on and a view of the notice board behind them bearing the inscription “In Memory Of”; the number D65 relates to Pte. E.W.K. Marshall 3rd Worc R 16.3.15 . Elsewhere I discovered the same photo supplied in a folder from the War Office.

And then in a cupboard I found a wooden frame that contained another identical photograph along with three service medals: the British War Medal, the 1914-15 Star campaign medal of the British Empire and the Victory Medal (the three medals together affectionately known by all as “Pip, Squeak, and Wilfred”). Also in this frame is a large bronze medallion inscribed with his name and the words “He Died for Freedom and Honour”. This medallion became known as “the Dead-man’s Penny.  In another picture frame there was also a Scroll given to the families of those who died.  I also found a booklet listing all the names of those who died and were buried in Boulogne Eastern Cemetery at this time. His entry is amongst several hundred others. 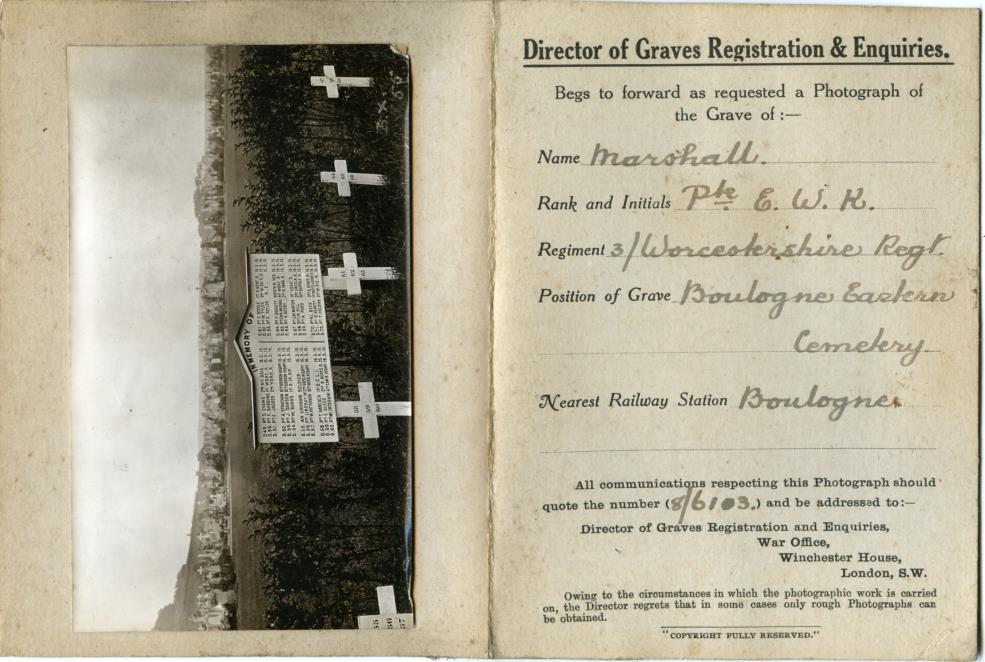 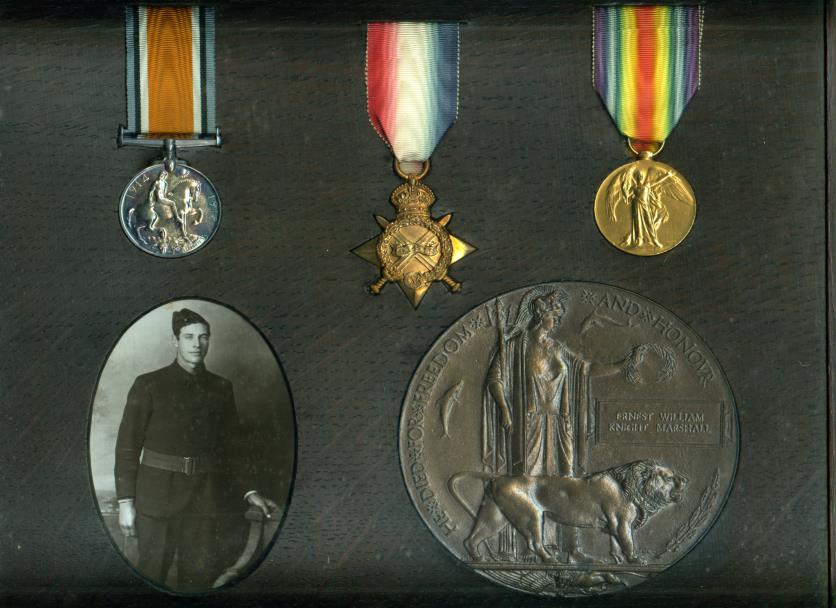 Ernest was the son of Mrs E Smith who is my great-grandmother. Emma Marshall had been in service in Stourbridge where Ernest was born. She also had a daughter Kathleen Mary Marshall (my grandmother) and it was she who had kept all these memories of her brother for me to discover.

Ernest had been a Market Gardener’s labourer working for Mr Arthur Jones when war broke out, living with his Mum and her husband, his step-father, Henry Smith, at 8 Belmont Terrace which is now 27 Willersey Road, Badsey.

In his obituary in The Evesham Journal of Saturday 27th March 1915), it was reported that “he tried to enlist” in August 1914, “but was twice refused on account of defective teeth”.  He tried again, and was accepted on September 1st joining the 3rd Worcesters. (he is listed in the Journal’s second “Roll of Honour” along with many of the Sladden Family, Pte T W Crane and Pte T Taylor).  The Journal report went on to say:  “On December 13th, while he was undergoing his training, it was found that one of the sections going out from where he was quartered was four men short. Pte Marshall volunteered to fill one of the vacancies; he was accepted and accordingly went to France. He received his baptism of fire on Christmas Day. All went well with him, until about a fortnight ago, when a piece of shell struck him in the face. It was first understood that the wound was not sufficiently serious for him to be taken to the hospital, but his friends have since been informed that he died, though no further particulars are forthcoming. Pte Marshall, who was always known among his friends as “Marlow”, will be much missed.”

In a further report on Saturday 17th April 1915 in The Evesham Journal, Private Mills, who was injured at the same time as Ernest Marshall, explained that he had been in the next trench; “and it is curious that he and Marshall were conveyed to base in the same motor ambulance. They lay side by side in the same hospital in France but it was not until he (Pte Mills) was at Sunderland, that he learned that Marshall was dead. Mills speaks in the highest terms of Marshall’s keenness and bravery, and says he was much liked by all his comrades”.

Having survived an awful winter in the trenches both men were injured at the Battle of Neuve Chappelle, the first major attack in the war launched by the British Army. It resulted in a successful advance of just 2 km, capturing an area 3km wide.   Casualties were heavy; The Evesham Journal reported that over 2400 men were killed, 8500 wounded, 1750 missing and 1690 captured. However historical accounts now put those losses as over 11,000 on the Allied side and similar losses were suffered by the Germans.

A full muffled peal was rung at Badsey on 23rd March 1915 in memory of those who had fallen in the war and point was given to it by the news that reached Badsey the day before of Ernest’s death.

His memorial service took place on April 15th 1915 just 6 months after he had enlisted.

His death obviously had an awful effect on his family who so carefully kept his photographs and medals etc. Unfortunately after I had discovered them, I placed them all together in one place in my house and all were stolen in a burglary. Thank goodness I scanned them into my computer. I would love to get them back but fear it is very unlikely to happen.

I have been very moved researching my ancestor and am proud that he and all those who died will be especially remembered these World War 1 Centenary Years.