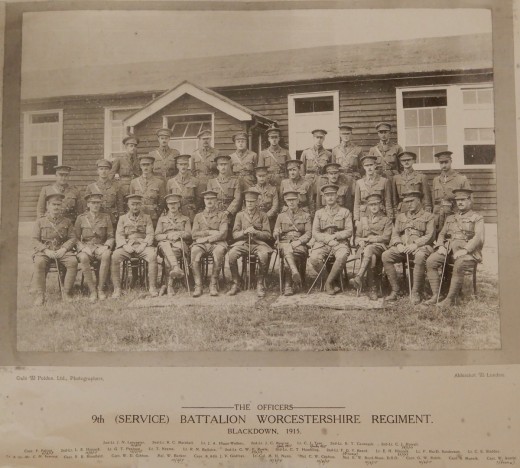 Official photograph of the officers of the 9th (Service) Battalion of the Worcestershire Regiment taken by Gale & Polden Ltd Photographers of Aldershot and London at Blackdown in 1915, shortly before the battalion left for the Dardanelles.  Cyril Sladden wrote on 20th June 1915:  “I have ordered photos of the officers and C Company which will be sent in due course by Gale & Polden of Aldershot.”  On 24th August 1915, his mother, Eugénie, wrote:  When we look at the photograph of your fellow officers and think what a number of them have been killed or injured, it makes me feel very sad.”  Against the names at the bottom, dates have been added for those who died.

The Sladden family kept a list of officers of the 9th Worcesters, noting if they had been killed or wounded.

At the top, the following note has been added:  “List kept by sisters of CES during the war – JCS, 8.11.77.”  This note was written by Cyril Sladden’s son, John Cyril Sladden, in November 1977.  The names listed are:

A line has then been drawn and 14 names added; these are men not pictured on the 1915 photo of officers.