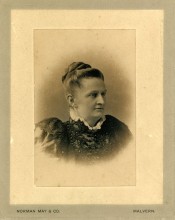 Eugénie Narcisse Sladden, née Mourilyan (1854-1916), was the wife of Julius Sladden and also his second cousin.

Eugénie, the youngest of eight children of John Mourilyan and his wife, Mary Ann, was born on 3rd December 1854 in Paris.  Whilst the Mourilyans were originally of French origin, descended from the Morillon family, Eugénie was a British subject by birth.  The Mourilyans had been settled in Kent since the end of the 17th century and all of Eugénie’s older siblings had been born in Sandwich.  But, the year prior to Eugénie’s birth, her father, John, a solicitor by profession, had set up practice in Paris.

Eugénie’s formative years were thus spent in Paris, although she went to boarding school at St Ninian in Sandwich.  The family worshipped at Marbeuf Church in Paris.  Eugénie was confirmed there on 4th May 1870 by the Bishop of Colombo.  The priest at the time was George Gardiner who was shortly to become the father-in-law of Eugénie’s brother, Fred.

Eugénie’s life was to change in her mid-teens.  Firstly, her mother died in March 1869 when Eugénie was aged 14.  Then, the following the year, the Siege of Paris took place, which meant that the Mourilyans had to flee the city.  At the time of the 1871 census, Eugénie was living with her widowed father and sister, Fanny, at 28 Great Coram Street, Bloomsbury.  They had returned to Paris by 1872.

On 15th December 1877 at the British Embassy in Paris, Eugénie and Julius were married.  Eugénie went to live in England with Julius at Chipping Norton where he was manager of the brewery.  Their firstborn child, John Dilnot Sladden, was born at Chipping Norton on 19th November 1878.

In April 1879, Eugénie and family moved to Badsey as Julius was now working in Evesham at Sladden & Collier Ltd.  The Sladdens rented Seward House in the High Street and, in 1903, after having lived in there for 24 years, they had the opportunity to buy the house and orchard opposite for £1,430.

Both Eugénie and Julius involved themselves in the local community, particularly the work of St James’ Church, Badsey, keenly supporting the restoration of the church in 1885.

On the outbreak of the First World War, Eugénie and her daughters were active in welcoming Belgian refugees to the village.  As a refugee herself from Paris in 1870, Eugénie was always sympathetic to the plight of others.

Sadly, the strain of the war, with three sons serving overseas, took a toll on Eugénie’s health and she died on 30th April 1916.  Some of the letters written by her grieving children and husband shortly after that date give a moving account of her death.  Eugénie was buried at Badsey on 4th May 1916.  A stained-glass window in the chancel was given by Julius in her memory.

NB - The town of Mourilyan in Queensland, Australia, 90 km south-east of Cairns, is named after a distant kinsman of Eugénie’s.  Lieutenant Thomas Longley Mourilyan (1840-1922) of Deal, who was Eugénie’s fourth cousin, was Navigating Lieutenant on HMS Basilisk under Captain John Moresby.  The harbour was charted in 1872 and Moresby decided to name it after his Lieutenant.