The new owners of land between Blackminster and Badsey wrote to us recently to ask if we had any information on its history.  They knew that there had been a barn which burnt down in the late 1970s, that there were two wells (one of which they have not yet found), and that Roman artefacts had been found on the land.  By looking back at auction notices, valuation survey field books, etc, we have been able to put together a picture of the changing nature of land ownership over the past few centuries.

The land in question

The land recently acquired is on the west side of Birmingham Road, immediately to the north and south of Bretforton Brook.  It begins near the bend in the road, close to the Midgley Dene Pumping Station.  It comprises three fields (two north of the brook, Fields A & B, and one south of the brook, Field C) and amounts to around 10½ acres in Badsey.  Historically, the land north of the brook was in the parish of Offenham (until 1949 when it became part of Badsey) and the land south of the brook was in Aldington (until 1921 when it transferred to Aldington).  It is all now within the parish of Badsey.  A public footpath runs from the Birmingham Road across the northern section to a footbridge over the brook and continues across the southern section until it reaches the access road leading to Bretforton Road.

The land south of the brook, originally in the parish of Aldington (Field C)

Reverend Williams now owned a complete block of land from the Aldington parish boundary in the north and east to the Bretforton Turnpike road to the south.

After the death firstly of Reverend Williams in 1829 and then of his wife, Jane, in 1830, members of the Allies family became inheritors of one moiety in his vast estates, namely the estate at Badsey, Aldington and Offenham.  The brevity of Thomas Williams’ will and the complex family relationships of the many beneficiaries of the will meant that it took solicitors 30 years or so to sort out the estate; there is a multitude of papers at Worcestershire Record Office.  The land remained in the ownership of the Allies family until it was sold in 1864 to Joseph Woodward (see below).

The land north of the brook, originally in the parish of Offenham

Field A – owned by Francis Grove, then Thomas Williams, then the Allies family

The field marked A on the map was owned by Francis Grove at the beginning of the 19th century.  A notice in The Worcester Herald of 11th April 1829 advertised the sale of 26 acres at Blackminster.  It was described as the estate of the late Francis Grove, a lunatic, deceased.  This field was part of Lot 2:  “All that piece of exceedingly rich meadow land, called or known by the name of Blackminster Meadow, adjoining Bretforton Brook, containing by admeasurement 5a 2r 20p”.  It was bought by the Reverend Thomas Williams.  Just a few weeks later he died.  As with the land south of the brook, it was inherited by members of the Allies family.

On 12th July 1858, some of this land was sold at auction.  Blackminster Meadow, 2a 0r 2p, formed part of Lot 2.  It was bought by Williams’ land agent, Joseph Woodward.

Field B – owned by the Wilson family of Badsey and Kempsey

The field marked B on the map was owned from at least the 18th century, and probably the 17th century, by the Wilson family (Lords of the Manor of Badsey).  In 1677, Thomas Wilson had signed an agreement which gave him a 1000-year lease on Badsey Manor House, the title and rights of Lord of the Manor, and other land, including Badsey churchyard, thus beginning almost a 250-year association with the village.  It is not known if the land he owned included the land at Offenham but wills of his descendants (Thomas’ son, Edward Wilson, 1663-1749, and his grandson, Edward Wilson, 1691-1737) in the 18th century confirm that they owned land at Offenham:  .  Edward, the grandson, pre-deceased his father.  In his will made on 20th October 1737 shortly before he died, he left “all that my estate called Blackminster in the parish of Offenham” to his third wife, Hester, for her lifetime, and then to his son, Edward Wilson (1720-1761), after her decease.  Edward, the son of Thomas, died 12 years after his own son and, in his will, left to his grandson, Edward, “all my lands, tenements and hereditaments in the parishes of Badsey, Offenham, Broadway and Bengeworth”.

This meant that Edward, the great-grandson of Thomas, had now inherited land at Offenham from both his father and grandfather.  This Edward Wilson (1720-1761) had three children.  Francis Wilson (1750-1822), the second son, was nearly 11 when his father died.  As the second son, he did not succeed to the title of Lord of the Manor, but it seems that he was given 35 acres of land at Offenham.  This was the first time since his great-great-grandfather, Thomas Wilson, acquired the Manor in 1677, that there had been more than one son to pass land on to.

Francis moved to Kempsey, Worcester.  By an indenture of March 1806, Francis Wilson gave to his son, Edward, 35 acres of land at Offenham:

The land in question, off Birmingham Road, was the “Barn Stable Cowshed and Fold Yard and two pieces of arable land and one piece of Meadow Ground” referred to above.  The Offenham Tithe Map of 1841 shows that the land comprised two meadows and a barn, amounting to around 5½ acres:

William Parker was the tenant in the 1850s.  Edward Wilson died in 1860 and, after his wife Sophia’s death in 1861.  As the Wilsons had no children, it passed to Sophia’s niece, Mary and Victoria Montague Angle, who had lived with them.  In 1863, Victoria, by now married to Robert Payne, sold this land, plus other land at Offenham, to Joseph Woodward (land agent for the neighbouring estate of the Reverend Williams) for £2,430.  Joseph Woodward in turn sold it as Lot 3 at an auction at The Northwick Arms Hotel, Evesham, in July 1866 to William Henry Ashwin.

Over a period of eight years, Joseph Woodward, who was the land agent for Reverend Williams’ estate (inherited by the Allies family), began buying large chunks of land at Offenham and Aldington as it became available for sale:  firstly, land north of the brook, Field A in 1858 and Field B in 1863.  Joseph Woodward’s father, William Woodward, had been land agent before him.

In 1864 the Allies family sold off the remaining land, which included the land south of the brook, Field C.  Thus, by 1864, the three fields which today make up the 10½ acres, was in the ownership of one person.

Joseph Woodward did not have the estate for long as on 2nd July 1866 he sold 275 acres of land at Badsey, Aldington and Offenham.  Lots 2-6, which was the land at Blackminster, were bought by William Henry Ashwin of Bretforton, of which the 10½-acre field comprised the following lots.

William Henry Ashwin (1835-1892), a farmer, Justice of the Peace and Deputy Lieutenant of Worcestershire, lived at Bretforton Manor.  On his death, the land was inherited by his eldest son, James Ashwin (1860-1941).

On 10th June 1912 James Ashwin put all his land-holdings at Offenham, Aldington and Badsey up for sale, with the exception of Black Banks Meadow, south of the brook.  North of the brook in Offenham parish, the fields being auctioned were: 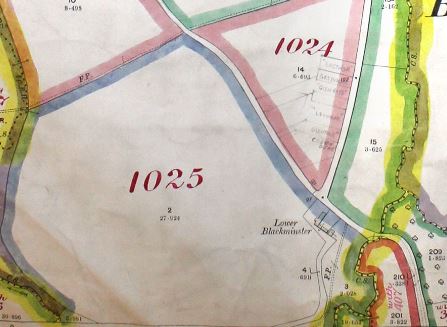 A fuller description of this land appears in the Field Books of the Lloyd George Valuation Survey, a nationwide survey of land ownership took place 1910-1915.  Specifically, with regard to the 10½-acre field in question, north of the brook this formed part of parcel 1025, which was inspected 5th June 1912 and amounted to 34a 1r 21p.  The first part of the description said:  “2 meadows, old wood and thatch barn and lean-to wood and iron open shed; 5 elms……  Public footpath through floodgate meadow.”  The second part of the description relates to the arable field to the north.

The land south of the brook was excluded from the sale because it was let to Evesham Rural District Council.  Since the end of the 19th century, there had been discussions about providing a public sewer for Badsey to complement the public water supply, but there had been objections about costs.  In January 1907, a tender had been accepted by the Parish Council for constructing a public sewer and the land was leased from James Ashwin for 99 years at a reasonable yearly rent. 9" diameter pipes were used to convey the sewerage along to the works. It was stipulated that an "iron, unclimbable fence of not less than 5 feet in height" was to be constructed. The lane (known as Packs) leading from the Bretforton Road to the land would serve as a maintenance access lane.

The Valuation Survey Field Books reveal that there were two parcel numbers:

The Ashwin family had sold this land south of the brook by the time of the Second World War.

It is thought that, at the auction of the Ashwin land in 1912, the land north of the brook was bought by William Mustoe (1841-1944).  For much of the first part of the 20th century, the barn on the land was known as Mustoe’s Barn.  During the 1930s it stood empty and children used to go there and play.  The barn was pulled down some time after the Second World War.  The late Michael Hewlett (1927-2010) remembered it as a thatch barn which stood on staddle stones.  There was nothing in there and the local kids would go in and play.

In the 1940s, when the Council Houses were under construction at Horsebridge Avenue, local children enjoyed cycling round the building site.  The sewer wasn't that far away and the biggest attraction was cycling around the sewerage tanks, or having a ride on the tanks' paddles as they travelled round. The game was called "going through the motions". Apparently, bamboo sticks grew tall there as well, and they improvised as good fishing rods. The sewerage works were eventually replaced in the 1960s by new works at Blackminster on Station Road.

Arthur H Savory was tenant farmer at Aldington Manor from 1873-1902, when it was owned by the Ashwin family of Bretforton.  Writing some years later, in the final chapter of his book Grain and Chaff from an English Manor, he told of his discoveries in the field known as Black Banks. His interest in Roman Britain led him to investigate local finds and develop his own theories. However, it should be noted that much of what he says is speculation rather than fact.

The Worcestershire Historic Environment Record for the parish of Aldington gives details on finds and landscape alongside information on past archaeological research and investigations.

Acknowledgements:  With thanks to Frances Seabrook, the new owner of the 10½-acre field, for posing the question about past ownership which has led to a fascinating case study of how land holdings have changed over the years.