As you will know from my first letter of this mail, I spent a couple of days sick leave at Badsey. Just before the taxi came on Saturday morning, the post came bringing a letter from you for your Father and asking him to explain why you could not write to me for Xmas.

poor, funny old thing. I can hardly imagine you ill. I mean – running a temperature and all that sort of thing. I expect it bothered you a bit that you couldn’t manage to get a letter off to me for Christmas. Unless you were feeling so awfully rotten that you didn’t care what happened! At first the news that you had fever gave me a nasty turn but I soon realised that had you got worse you’d have been sent to hospital and we should have had the usual official wire. I hope, dear, you had all you wanted and were as well looked after as circumstances would allow. Now I cursed my luck that I was not stationed at Amarah for once in our engaged existence I could have proved myself of some use to you!

Your doctor could have wired for me, and I leave the rest to your imagination!

I cannot write much because I have to go and dress for our Xmas dinner. The Sisters had theirs yesterday.

I had a horrid experience when I was going round the different wards to see the ‘decorations’ yesterday. In one of the wards I did not realise I was standing under some mistletoe. Suddenly someone came from behind me, seized hold of me and almost kissed me – but he reckoned without his host – I got my hand under his chin and the other over his mouth and bent his head, back, back until he was powerless to do anything. There were some officers’ not far off who called to me and I don’t think this man realised they were there until that moment, so he gave in quite suddenly.

I’ve seen him several times today but have mystified him completely by answering him quite civilly but just as though he was of no more consequence than the chairs in the ward: if he had only pretended to kiss me and pecked the air and done it in a joking way I shouldn’t have struggled with him, but the whole thing was so deliberately determined that my blood was up and if he hadn’t given in I know I should have hurt him.

There were several little similar affairs amongst the girls who like that sort of thing so I expect this man made an error in judgement or he wouldn’t have attempted anything of the kind.

So, darling, you see I can look after myself pretty well, can’t I? It would have been nicer if you’d been there to do it for me. No one man shall ever kiss me so long as you are away. You can trust me for that.

Cecil spent last Xmas in Boulogne with Mother and Bar. I’m afraid they have been feeling it dreadfully this year.

And your home people too have felt the big Gap in their midst too.

Your Father said he could not bear to have the old custom of the basket of presents this year.

It is three weeks now since I have heard from you. I hope next mail will bring me better news of you, but as the mails have been coming in once a fortnight lately, I’m afraid, I shall not hear next week.

I wonder how you spent Xmas Day? I managed to get to the Early Service at 6.a.m. Did you have any service in the field?

Today’s paper gives no news from your part of the world.

All my heart’s love – hoping you are over the worse now from your spell of fever. 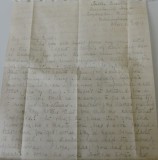 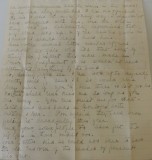