My own dear Sweetheart,

Having heard last mail that I was on the sick list you will be rather surprised to get a letter written from Badsey by this mail.

With my usual haste, I got better before I became bad. Beautifully expressed, is it not?! On Wednesday morning the doctor asked me how I felt and I told him much better – he took my pulse which he found was still a bit “dicky” and then asked me where I lived. I told him France. Then he asked if I hadn’t any friends nearer than that. Then it dawned on me what he was driving at, and I quickly replied, “Oh yes – at Evesham.” He then said he would like me to have some leave and talked it over with the House Sister. If it had not been so near Xmas I should have had a week but there is an order this year that no one in the Army, nurses or officers at home are to be given leave for Xmas on account of the railway being needed by the Government. I eventually got leave from Wednesday afternoon to Saturday morning. This is Friday evening so my glorious slack is nearly at an end.

May had written to me previously telling me to be sure and come here when I was convalescent so I knew it would be all right if I wired to expect me that night. I felt a bit groggy rushing off at a moment’s notice but it was worth it to get away for 2 or 3 days. I found the home people all very well, and cheery. Your Father looks better than when I saw him last 2 months ago. He has sent you his photograph with his grandchild on his knee. It is a splendid photo. He has given me a copy for both of us, a different position, which is also excellent. Isn’t your niece growing up quickly?!

Today’s paper speaks of further movement towards Kut but I believe that we shall soon get even more satisfactory news – perhaps it will be kept for Xmas day.

I have had a nice restful time, but cannot honestly say I felt up to very strenuous work, but still I dare say I shall manage to get along.

There was a letter from Mary this morning. The influenza seems to have pulled Arthur down a good bit and he could only just manage to send Mary a few lines, further effort was too much for him. He seems to have a good deal of neuralgia which affects his eyes. My eyes were the chief trouble too.

Your Father has also given me ½ a dozen very nice handkerchiefs. I am very glad to have them. The girls are giving me stockings at my own request. Aunt Jessie and Uncle Ben sent me some pocket money.

Cecil’s name is in The Times Obituary list today, and his biography amongst those of “Fellow Officers”. I am sending you a copy of the Times and getting one for myself as well. I did not expect to see it as I had not been told it was going to appear, and I do not yet know who inserted it.

You will notice President Wilson’s incomprehensible views on the war in the same Times. Your Father is perfectly furious with him.

I have just been reading a letter from Bernard Sladden who is on his way back home to go to the Front. He is uncertain of his destination but thinks it will eventually be England but the troops may possibly winter in Egypt, but he does not really know. He is going to visit Badsey as soon as he gets the opportunity. His brother Arthur has taken over the ranch and Bernard says he manages it splendidly, especially considering he has been accustomed to office work. Arthur wanted to join the Army instead of Bernard, but the latter considered it was his duty to go being so much the junior of the two.

George has written Kath a letter of twenty pages describing one day’s work in the Transport Section. I haven’t seen it yet but they tell me it is wonderfully interesting. George speaks of you as that “shadowy figure in a shadowy land”. I’m afraid it is a land of facts and not shadows at present.

There was an interesting account in The Times of the air service out your way - and also a description of the country, the mirages etc. I am wondering very much how and where you are spending this Christmas time. You can guess my thoughts have been with you constantly these days of leave and these nights too. I have the spare room and oh – it is such a relief to get a room to one’s self for a change …..

At this point supper came in so my line of thought was broken.

Since supper I have read George’s letter of 20 pages.

It is so interesting and very graphic and amusing in parts. From the picture he draws I think the life of the transport men is quite worth living and I should say George quite enjoys his work.

I have finished your scarf. It is not one of the long mufflers but is supposed just to be worn crossed over the chest. The long ones are so ungainly I think.

This is the third Xmas I have spent here and had to return to hospital a day or two before Xmas. Next year I hope I shall be able to stay for Xmas and that you will be able to do so too. Wouldn’t be heavenly, dear, if you and I could be together by then?

Tonight, my last night in the spare room will be a very precious one to me. I shall live in memories of the past. Memories of our evening hour together – memories of talks we’ve had together – of those heart to heart long silences – those long kisses. It is such a relief to be alone – to have the opportunity to dwell on our love for each other. The lives we are both leading tends to kill or rather temporarily deaden much that is beautiful in life and I hate, hate, hate never to have a moment to think of you, except as being a figure far away. I like to feel you near although so far.

I shall be very busy over Xmas – but if possible I’ll write again by this mail from B’ham.

God bless you, darling, and guard you. Your Father and the girls send their love.

With all love and a kiss

From
Your ever devoted
Mela 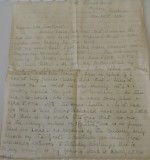 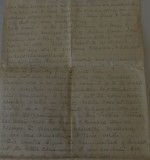 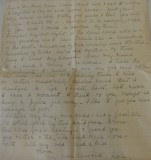