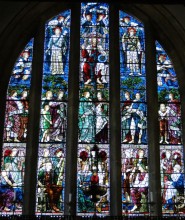 Stained glass window in the church of St Mary the Virgin, Buckland, in memory of Frank Butler. 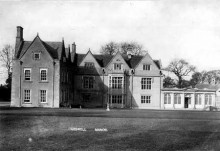 Francis Mourilyan Butler (1876-1917), known as Frank, was the nephew of Eugénie Sladden, being the son of her sister, Fanny Butler.

Frank was born in 1876 at Moreford Lodge, Norbiton, the third of nine children of Charles and Fanny Butler.  Like his brothers, Frank was educated at Charterhouse in Godalming, which he attended from 1890-1894; he was a member of Pageites House.  He was still living at home in 1901, described as a tobacco manufacturer.

Frank married an American heiress, Jacqueline Brown Lawrence (1872-1930) on 18th October 1902 at the Church of the Transfiguration, New York City, USA.  They had two daughters and one son:  Vera Lawrence (1903), Patience Mourilyan (1908) and Francis Charles Joseph (1915-1940).  In 1911, they lived at Westfield, Faringdon, Berkshire, with a nurse and four servants; Frank’s occupation was given as private means.  Frank and Josephine later bought Carswell Manor in Faringdon, Oxfordshire, a Jacobean country house, now St Hugh’s School, an exclusive preparatory school.

On the outbreak of war, Frank joined the 93rd Army Brigade, Royal Field Artillery, receiving his commission in 1915; he was appointed acting Captain in June 1917.  Frank was killed in action on 8th October 1917 at Passchendaele and was buried at Canada Farm Cemetery, Ypres, Belgium.  A report in The Surrey Advertiser of 29th October 1917 quoted the words of his Colonel:  “I have lost a splendidly gallant and capable officer, a good friend, a man of sound judgment who was mad keen on his work.  He never spared himself, and was particularly loved by his men.  He was in command of his battery at the time he met his death.”

Beneath a stained glass window at the church of St Mary the Virgin, Buckland, Oxfordshire, there is a scroll at the base with the words:  “To the Glory of God and in ever devoted memory of Francis Mourilyan Butler, Captain RA, who fell in action October 8th 1917 near Ypres and was laid to rest near Elverdinghe.”