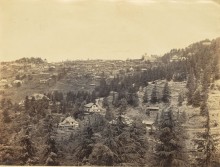 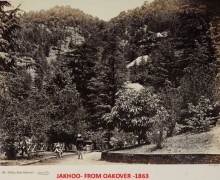 Simla (also known as Shimla) is a hill-station in northern India, located at 7,234 feet in the foothills of the Himalayas.  Cyril Sladden spent two months in Simla from early June to early August 1916 as recuperation after being wounded in Mesopotamia.

Simla was once the capital of the undivided state of Punjab but, since 1971, has been the capital and largest city of the Indian state of Himachal Pradesh.  In 1864, Simla was declared as the summer capital of British India and it was also the headquarters of the British Army in India.

Cyril enjoyed being in Simla and gave an interesting description of the place in a letter of 15th June 1916.  He refers to a hill called Jacko or Jakke which he did not know how to spell.  The hill in question was Jakhoo Hill, which was one of seven different hills on which Simla was built, and the highest at a height of 8,051 feet.