Official Opening of the Recreation Ground, May 1920 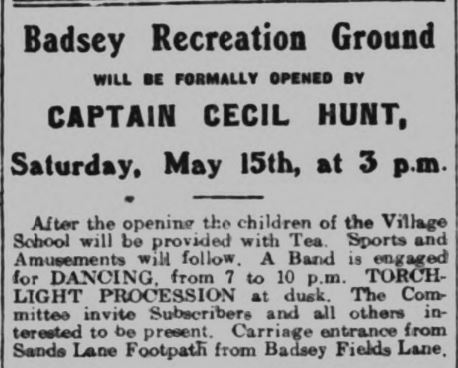 On Saturday 15th May 1920, a large crowd assembled on the new Badsey Recreation Ground between Sands Lane and Badsey Fields Lane for the formal opening by Captain Cecil Hunt, the son of a former Vicar (the late Reverend T H Hunt). The day was favoured with fine weather.  The speeches were delivered from a dray on which were Julius Sladden (Chairman), Captain & Mrs Hunt, Miss Ethel Sladden, and members of the Committee.  A lengthy newspaper article in The Evesham Standard of 22nd May gave a report of proceedings.

Mr Sladden said that the ground was a recreation ground for the enjoyment of the people of Badsey. Captain Hunt emphasised that, after the agony of war, the people must have recreation.  This Recreation Ground came in the nick of time for that purpose.  He hoped it would brighten the life of the village.

A hundred years on, when we have been living through the grips of a global pandemic, the existence of an outdoor recreation area has never been more important.  Captain Hunt’s words resonate with communities that have endured lockdown measures as a result of the COVID-19 crisis.

Whilst we have been unable to hold a grand event to celebrate the centenary of the Recreation Ground – no children’s sports, amusements, band, dancing and torchlight procession as there was a hundred years ago – we felt it important to mark the centenary of such a focal point of village life.  John Sharp’s centenary booklet and the information board below (designed by Ian Gibson from text supplied by John), on display near the Sands Lane entrance, are the result of an idea which was first suggested to us when Brian Smith sent us a poem reminding us that the centenary was in 2020. 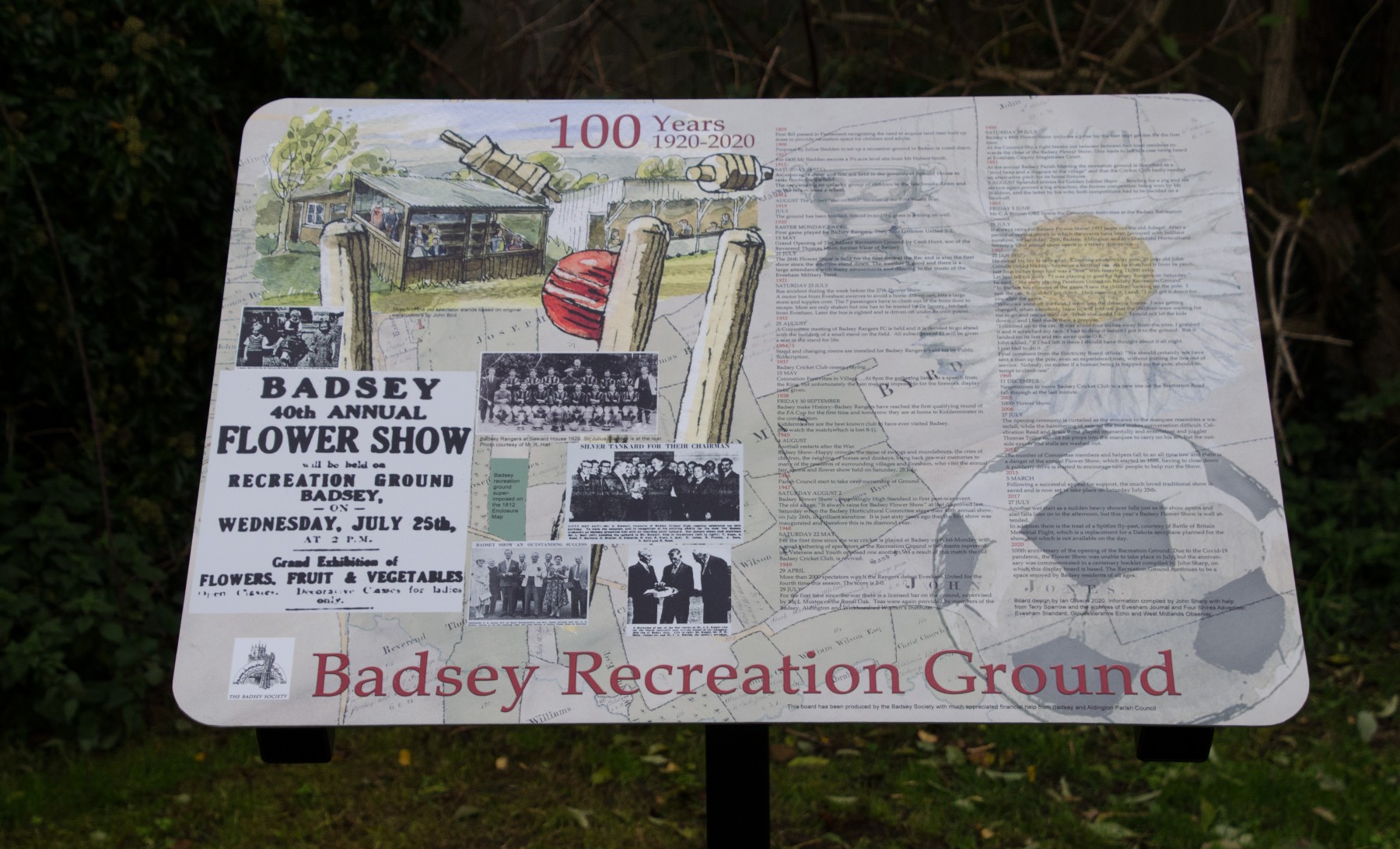 We are extremely grateful to members of the Parish Council who have very kindly donated money towards the cost of the board.  And of course thanks are due to Brian Smith for suggesting the centenary in the first place, to John Sharp for the huge amount of time he spent in research in order to produce the history, and to Ian Gibson for designing the board.  We hope that the Recreation Ground will continue to be enjoyed by parishioners for the next hundred years.

Official Unveiling of the Recreation Ground Information Board, October 2020

On a cool autumn day towards the end of October, a small group of people met on the Recreation Ground to perform the unveiling of an information board to celebrate the centenary of the Recreation Ground.  The COVID-19 pandemic which has affected every single community in the world in some way or other, meant that any plans to hold an event on the actual centenary date in May or at the annual Flower Show in July were thwarted.  The pandemic is far from being under control and “the rule of six” prevails, so it was a select group that assembled on the morning of Saturday 24th October to witness the unveiling, with various other members of The Badsey Society viewing from a respectful distance.

The six members of the unveiling party were:  John Sharp who wrote the official centenary history and compiled the text for the board; Ian Gibson who designed the board; Brian Smith who performed the official unveiling; Gary Bailey and Mike Tennant from the Parish Council; and Will Dallimore who acted as video cameraman.  John Sharp opened proceedings by saying:

We are here today to commemorate the 100th anniversary of the opening of the Recreation Ground to the villagers of Badsey.  The anniversary would probably have been missed if Brian Smith had not contacted the Badsey Society with his poem of the Recreation Ground three years ago. This unveiling, which has been delayed because of the current pandemic, should have occurred on May 15th, when 100 years ago, in 1920, the Ground was opened.  This was 20 years after the original meeting of the villagers of trying to find the right piece of land, buying it for the right price, which they finally managed to do for the sum of £400 in 1912 from Hubert Smith who originally owned the land we are now standing on (though the final cost of the Ground was £900). In 1946 the ground was handed over to the Parish Council from the Trustees.

Today we have here Gary Bailey and Mike Tennant, the Chairman and Vice-Chairman of Badsey Parish Council.  The Council has kindly donated towards the cost of the Information Board which has been organised and the balance paid by the Badsey Society.  Also present are Ian Gibson who designed the board based on information taken from the Badsey Society Booklet written by me, and Brian Smith, great-grandson of Hubert Smith.  Brian will now unveil the board which officially commemorates the anniversary, and also say a few words.

Brian Smith began by thanking Ian Gibson and John Sharp for the design and wording of the information board.  As the great-grandson of Hubert Smith, former owner of the land, Brian said it was a great honour to be asked to perform the unveiling.  He felt that if great-grandfather had been a rich man, he would have given the land, but the next best thing was to sell it to Julius Sladden for a reasonable price on the understanding that it would be used as a recreation ground for use of the parishioners at any time.  Hubert also contributed to the fund administered by Julius Sladden, started in 1912, but then the war intervened and it was not opened until eight years later.  Hubert Smith had nine children, so he must have a large number of great-grandchildren, many surviving, but Brian said he personally only knew of four others.

Brian recalled happy memories of the Recreation Ground, having strong links going back to 1949 when, as a five-year-old, he was taken by his Auntie Dot to give very loud vocal support to Badsey Rangers from the middle of the grandstand; this began his love of football.  An added attraction was the baked potatoes and butter served at half-time by Mrs Perkins.  Later, Brian went with his friends and would have a half-time kick-around, being chased off by groundsman, Charlie Baker.  As a pupil at Badsey School, he came once a week for games as there was no school field in those days and, on other occasions, he would often come to play football carrying the ball in a sprout net.  In 1960, Brian had the chance to play for the re-formed Badsey Junior; every player lived in Badsey.

Brian also recalled watching Badsey cricket team who played in less than ideal conditions on a mat which formed the pitch as the surface was not fine enough (this was before cricket moved to Ballard’s Park in the 1960s).

With the creation of the Recreation round, the annual Flower Show was now able to move to this new location – children’s sports, sprinting, sack race, egg and spoon being fondly remembered with prize money spent at Billy Kimberley’s Fair.

Brian said that the official anniversary of the opening of the Recreation Ground was not completely ignored.  The country was still in lockdown but, on 15th May, Brian, together with his wife, Hazel, took a bottle of Prosecco and two glasses and sat on a bench drinking a toast to the villagers of a hundred years ago who left a lasting legacy of the Recreation Ground for future generations.

Brian concluded by saying that he had many happy memories of the Recreation Ground and had certainly had his money’s worth.  It was therefore his great pleasure to perform the official unveiling of the board.

At first they had the vision,
Then raised the money, every pound.
We thank those villagers from the past
For our recreation ground.

Will Dallimore acted as film cameraman on the day and has produced a video of the occasion.  It didn't rain but the day was quite blustery which made filming the ceremony quite challenging but the video gives a flavour of the event.  Tony Spinks took the still photos. 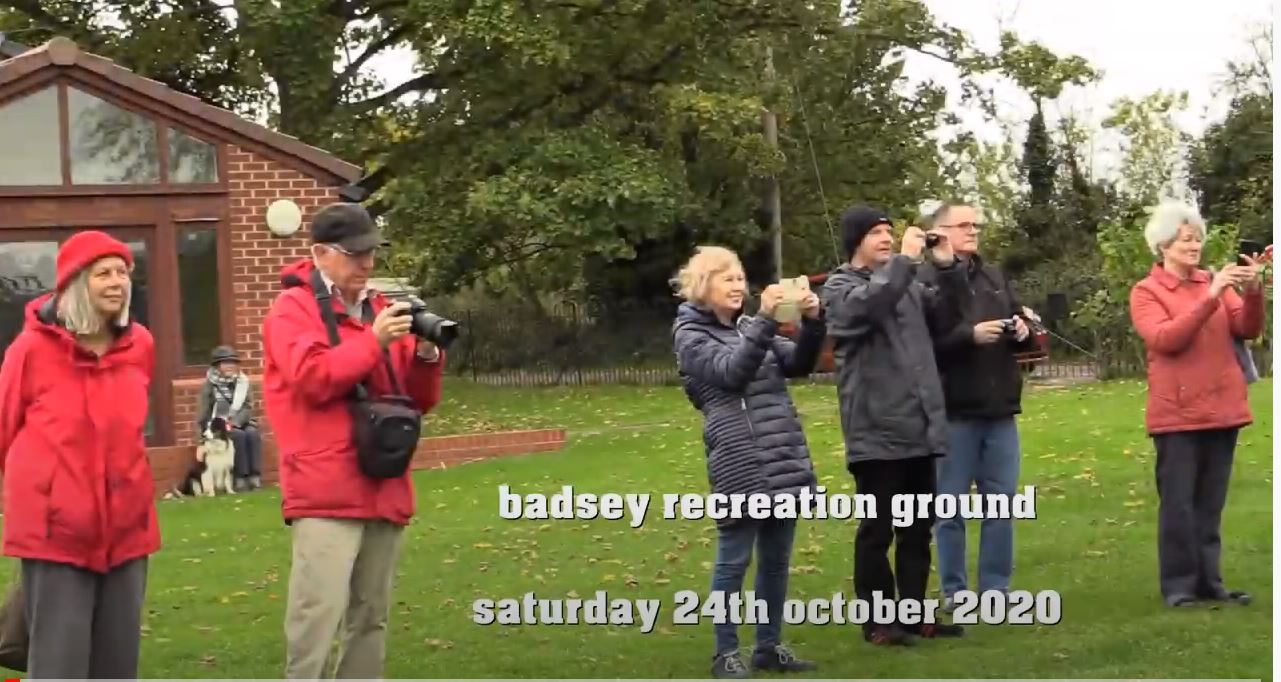 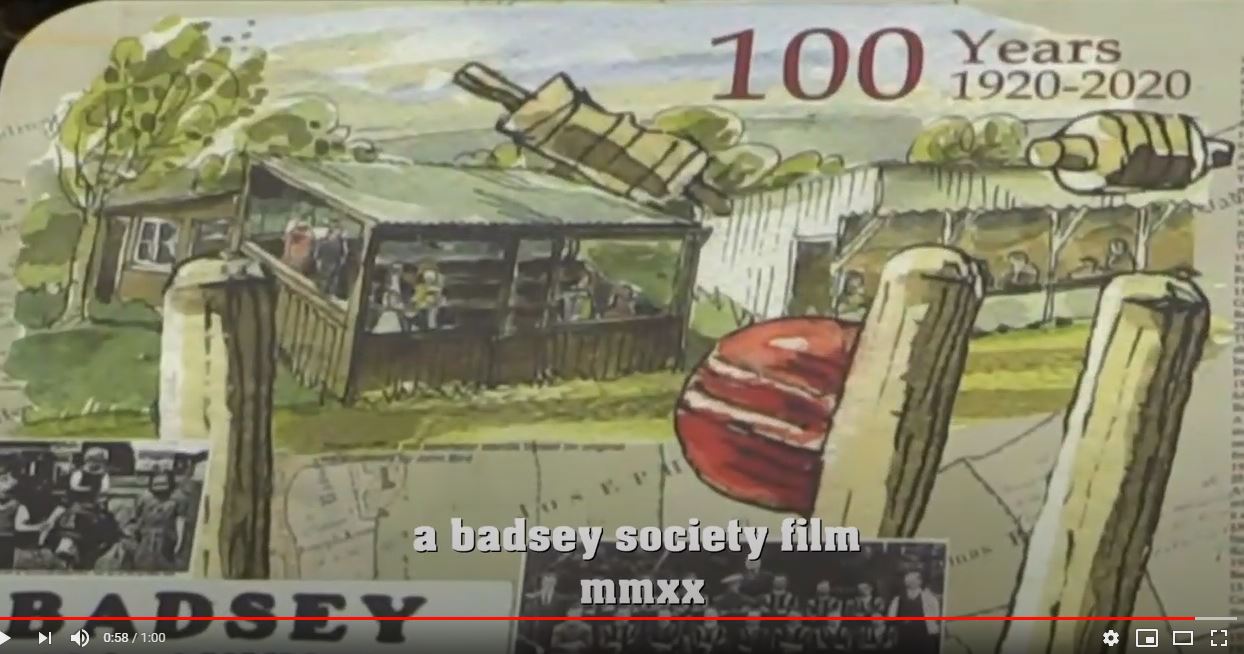 Copies of 100 Years of Badsey Recreation Ground, 1920-2020 written by John Sharp are available from The Spar, Badsey, or via mail order online.