The Crypt of the Church of St John the Baptist, Wickhamford

The Churchyard of the Church of St John the Baptist

When the first church was built in Wickhamford, possibly in the 12th century, it consisted of a nave and chancel, the tower being completed in 1686.   There is also a crypt, but the exterior entrance to this, on the north side of the church, was blocked soon after the end of World War 2.  At that time there were steps leading down to a door and the crypt contained a heating boiler, which was no longer required.  Crypts are usually present beneath a church chancel, but may extend into the nave area.  There is no information on what burials had taken place in the crypt or whether it had been used as an ossuary for bones removed from the churchyard as old grave plots were re-used.  Until 1893, the churchyard had enough space for about 150 plots.  An additional area was obtained in that year which extends from the present gate and wall to a line southward from the West end of the church tower.  This area had enough room for a further 100 plots approximately.   Even with this addition, by 1957 it was necessary to allocate a new area of land on Golden Lane for a Parish cemetery.  After this date only a few more burials took place in existing family graves in the churchyard. 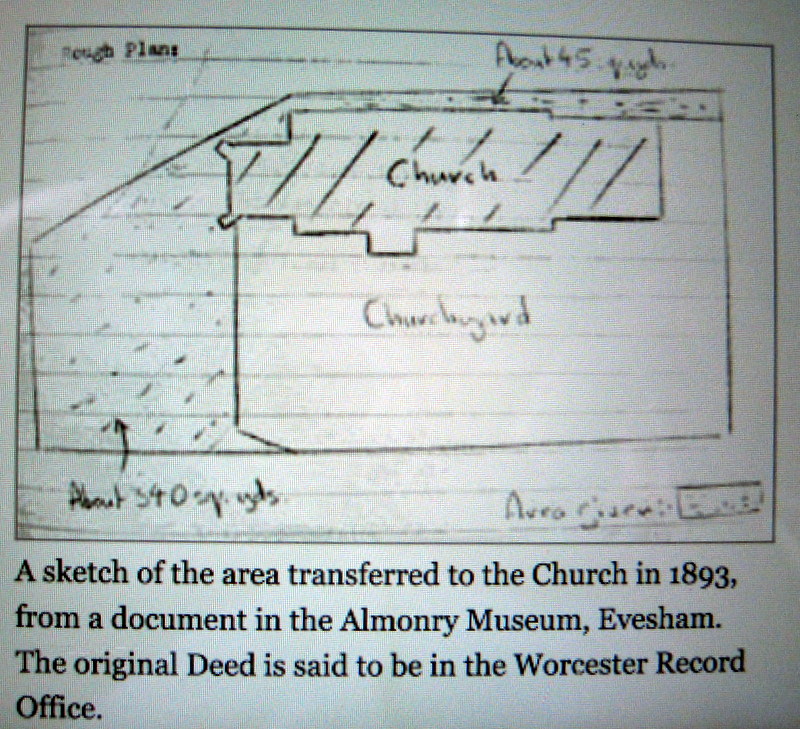 From 1538, the law required a Burial Register to be kept in each parish and the number of interments in the original churchyard area, from then up until 1893, was 710.  Before records were kept in a Register, burials took place for, perhaps, 300 years or more.  Depending on the village population in this early period, there may have been around 500 burials.  From 1893 until 1966, another 150 burials took place in the churchyard.  Based on these figures, there may have been a total of over 1,300 burials alongside the church.

Only eminent people connected with the village would have been laid to rest within the church. The most obvious examples are the Sandys family members, who owned Wickhamford Manor and Estate from 1594 until its sale in 1869.  The Sandys family’s main residence is Ombersley Court and they did not reside in Wickhamford Manor for some 160 years before it was sold.  In that period, it was let to a series of tenants.

The prominent tombs in the chancel are where Sir Samuel Sandys (1560-1623) and his wife Lady Mercy Sandys were placed, together with their son, Sir Edwyn Sandys (1591-1623) and his wife, Lady Penelope Sandys.  These are the only burials in the above-ground part of the church.  Others were placed in the crypt, but who were they and how many?  The short list below, not in date order, gives some details of seven residents known, or thought to be, lying in the crypt.

The Burial Register also records the deaths of four other members of the extended Sandys family who were buried in Wickhamford and it is probable that they were laid to rest in the crypt.  The oldest remaining gravestone in the churchyard commemorates William White (ca 1637-1699). If the members of the Sandys family had been interred in the churchyard, it is likely that their gravestones would have been of good quality and still survived.

Hannah Sandys, wife of George Sandys, who died giving birth in 1647.  She was buried on 4th February and her daughter Margaret Sandys who only lived a very short while, was buried on 6th February.

Mrs Mary Sandys was buried on 21st September 1681, but there is no further information on her husband.

As the main seat of the Sandys family was Ombersley Court, most of the baptisms, marriages and burials of members would have occurred in the church there.

Thomas Timbrill (1652-1737) was a tenant at Wickhamford Manor from about 1717.  He was buried in Bretforton, but other members of his family were buried in Wickhamford.  His mother, Ursula Timbrill, died in 1709, as a widow, and was buried in the parish in January.  His son, also called Thomas Timbrill died, aged only 33, and was buried in Wickhamford on 13th December 1731.  He is commemorated on a prominent tablet on the wall between the nave and chancel.  There are no gravestones present in the churchyard for these two and burial in the crypt is a possibility.

Church records were only kept from 1538 onwards, so it is very likely that, before this date, other prominent Wickhamford residents were laid to rest in the crypt.  If, in the future for some reason, the crypt is ever re-opened, more information may be found.