Background to the Survey 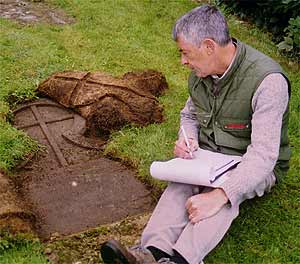 The first, and only previous survey, of the monumental inscriptions of St. James’ Church, Badsey was carried out in 1987, by a team of volunteers from the Birmingham and Midland Society for Genealogy and Heraldry (B&MSGH). The published results contains 443 monumental inscriptions with an index of 443 names, and contains maps showing the locations of the monuments, including those in the church interior. Some of the inscriptions are no longer readable, therefore this remains an important document. However, the original registers were not consulted during that survey, therefore there is no record of the numerous discrepancies between the inscriptions and the original burial registers. Also time, and restrictions in force in 1987, did not permit the cleaning or disturbance of stones, so a number of inscriptions are incomplete, or not recorded for those stones lying face down. Although not a member of the B&MSGH, I had also been a less active member of this volunteer team, whose members were involved in recording of inscriptions in all the graveyards in Worcestershire. In July 2001 I decided to carry out a new and independent survey of the monuments, and to provide a photographic record of the monuments, before some of them deteriorate any further. This publication therefore, gives the results of this survey.

Before recording the inscriptions the church burial registers were consulted, including those held on microfilm in the Worcester Record Office (Registers 1 to 3) and those presently held by the Incumbent (Registers 4 & 5). The Bishops Transcripts were also examined, and a number of burials not recorded in the registers were found and added to the burial database. There are five burial registers covering the following periods:

The Book of Remembrance

This book, covering the period May 1964 to July 2000, is kept in a locked display case inside the church. It contains the names and dates of death of 111 individuals whose cremated ashes are in the Garden of Remembrance, or have been interred in family plots. The names of 32 of those listed are also recorded in the burial registers.

The existing church burial maps held by the Incumbent, were also examined. One map shows the locations and plot numbers for many of the older graves, but numbers are not recorded against the entries in the registers. It is also obvious from this map that some of the older stones, many now lying horizontal, have since been moved, or disappeared altogether. Unmarked graves have been crudely drawn in for some areas only. I have therefore produced a new set of maps, and included them in this survey.

Memorial stones described as Tombstones and Plinths in the 1987 Survey, are today referred to as Headstones and Kerbs, and I have adopted the new terminology for this survey. Only in a small number of cases have I described the type of monument in detail. Some headstones are either surrounded by, or attached to kerbs, in all cases I have titled these Headstones & Kerbs. 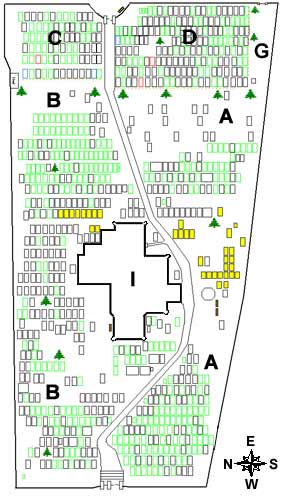 The map shows a complete plan of the churchyard divided into five plots, A to D, and the Garden of Remembrance (GOR). The numbering of the plots in each section is as follows:

After consulting the burial registers, some plots were found to contain burials of individuals not recorded on the inscriptions. These individuals are included in the reference notes for that plot, as are those whose ashes are known to have been interred without ceremony into family plots, and are not recorded in either the registers or the Book of Remembrance.

Church Interior (I) Although the majority of inscriptions within the church are memorials for the dead, other events, such as bell ringing, and a framed list of the Titular Vicars of Badsey & Aldington, are included in this survey. A plan of the church interior, shows the locations of the monumental inscriptions, with numbers prefixed with the letters Ch. in the notes.

This survey was carried out as intended, with each monument personally examined and the details on each recorded, including the type of monument. Details were recorded on paper and electronically on a computer. All stones, lying face down or half covered, have been lifted and read. The bases of some part sunken headstones and kerbs have also been uncovered and checked. And in doing so, revealed some unrecorded inscriptions of individuals and verses. The ground has also been thoroughly probed over a period of weeks, and seven previously unrecorded 17th & 18th Century stones were uncovered, including three out of place footstones belonging to nearby headstones. These footstones will be reunited with their parent stones in due course. The oldest stone uncovered was dated 1644. This headstone, now lying horizontal, and probably not in its original location, commemorates the death of Elizabeth George, who died on the 26th of February of that year. Other George family stones are located nearby. One footstone, inscribed I.P. 1663, caused some confusion at first, as no individual with these initials was buried in that year, only a Jane Pigeon. However, a bit of research into 17th Century handwriting revealed that the letter I and J were often interchanged, therefore our footstone belonged to Jane Pigeon who, according to the registers, was buried on the 20th of May 1663. This footstone has no parent stone, though a totally eroded headstone, lying face down and close by, is the most likely candidate. Another 17th Century footstone has only a verse inscribed on it, obviously relating to a female interment, but as there is no accompanying headstone, the identity of this lady will never be known.

While the commonest name in the burial registers is Knight, with 169 recorded burials from 1561 to 2001, the surnames of Brzezinski, Knurek and Tyszko are less so, and reminders of the war years, and the arrival of Polish refugees into the region when the war ended. Some eventually settling in Badsey and becoming part of the village community. The surname Rosskopf is particularly interesting. Johann Rosskopf was a WW1 German prisoner of war, who was billeted in Badsey Manor House, and died in November 1918 at the age of 33 years. His remains were exhumed in 1963 and removed to the German War Cemetery at Cannock Chase. The name Willi Ritterswuerden is also commemorated in the graveyard. He was a German prisoner from WW2, who decided to remain in England after the war. He married a local girl, Evelyn Major, who now lives with her daughter in America.

I have spoken to many visitors to the graveyard over the last six months, many of these local people visiting family graves. I have learnt much from our conversations, some sad tales of sudden natural death, or by accident, but mainly of the life and times of the deceased. Some recalled buried friends and neighbours, and provided clues to who was buried where in unrecorded and unmarked graves. This has been a most interesting and rewarding exercise, which has taken much longer than anticipated. I have enjoyed reading and recording the inscriptions and verses, and in doing so hopefully brought some long forgotten individuals back to life, if only in printed form.

Finally, this survey is published in two ways: as a book and electronically on the Badsey Web Site, which will allow interested persons world-wide access to the inscription and the photographs. The web pages can easily be updated as and when new inscriptions appear.

While the reading, recording, cleaning, and photographing of the inscriptions involved only myself, the whole project would not have been possible without the help and encouragement of others, and for this I give my thanks to the following: the Reverend Dr. Adrian Hough, for the freedom he allowed me to carry out this survey, and access to the burial registers in his care; for their work on the original 1987 survey I thank the team of volunteers from the Birmingham and Midland Society for Genealogy, namely Pauline Page, Linda Bushell, Geoff Farmer, Jeremy Boaz and Gillian Lawley; a further thanks to Linda Bushell for the loan of study material, and for her past help in teaching me how to record inscriptions. I also acknowledge the help I received from brothers John and Will Dallimore when muscle was needed to lift headstones for reading. For the same reason I thank David Caswell for his help and the loan of equipment. For permission to reproduce his picture of Christ, which is hanging inside the church, I thank Michael Barnard. I also wish to acknowledge the help I received from the following two businesses: Browns Memorials of Port Street, Evesham, for supplying catalogues and for identifying various stone materials; Ward and Dale Smith, Chartered Surveyors & Historic Building Consultants, Evesham, for providing free photocopying facilities during the initial stages of this survey. Thanks are also due to the following: Terry Sparrow, Maureen Spinks, and Church Wardens, Sue Cole and Chris Robbins. Will Dallimore designed the webpages for the B& MSGH survey and many of his design ideas have been adopted here. A special thank you to Richard Phillips, for his help in many ways, in particular for the excellent way he has presented my work on the webpages. My final thanks must go to all the visitors and villagers I have met during this survey, for the interest they have shown in my activities, and for the useful information I have gleaned from them during our conversations.

Here are the results of the survey.