This major auction included land and property in Wickhamford, Bengeworth, Aldington and Badsey. The locations are shown on a map. Full details of this appear on the Badsey Society archive.

A total of 631 acres of market garden land, pasture and ash coppice, 36 modern dwelling houses and three cottages were put up for auction by E. G. Righton & Son at the Town Hall in Evesham. The majority of the 85 lots were in Wickhamford, with some in land adjoining the village in Bengeworth, Aldington and Badsey. At that time the land and houses produced a gross rental value of £1,832 p.a. The property was being auctioned by order of the Trustees of the Will of the late Captain J. P. Lord. This article gives a summary of the land, properties and tenants for the Wickhamford lots. 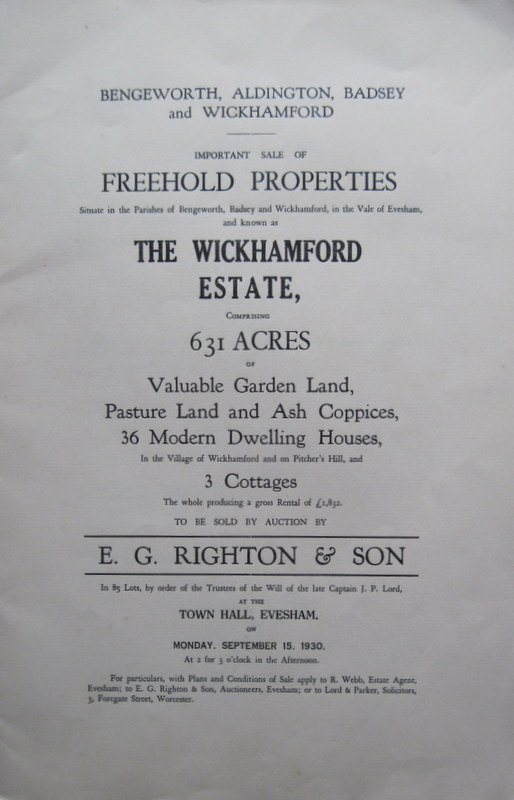 John Pickup Lord, the son of John and Ann, was born in Lancashire in 1821. He married Constance Charlotte Hallett in London in 1858 and they had six children, who were born in Cheltenham and Hallow, Worcs. He died at Hallow in 1877 and Charlotte died in 1884. John Lord owned property in Lancashire and at Hallow, Aldington, Badsey and Wickhamford. The final parts of his Estate were not sold until nearly 70 years after his death. Trustees were appointed after his death to administer his estates and a succession of new trustees were appointed after 1878.

The table below gives Righton’s lot number and the corresponding reference numbers in the plan of the estate (see maps at end of article). Lot nos 1-4 and 25-41 were outside the parish of Wickhamford and are not dealt with here.

Index of Tenants and where they appear in the Table of Lot numbers. Names in bold are of those shown in pictures - the photographs of the market gardeners are not usually from the period around the time of the sale in 1930.

Thanks are due to Maureen Spinks for the background information on John Pickup Lord.