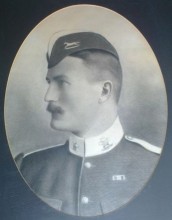 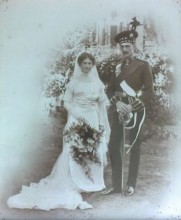 Wedding of Courtney Tanner and Ethelwyn Mourilyan in 1911. With grateful thanks to Chris and Julian Higman for allowing us to use these photos.
Known As
Courtney; Captain Tanner
Biographical Details

Frederick Courtney Tanner (1879-1965), known as Courtney, was the husband of Ethelwyn Florence Mourilyan who was the niece of Eugénie Sladden (née Mourilyan).

Courtney was born on 2nd December 1879 at Plymouth, Devon, the youngest of five children of Charles Frederick Tanner, a merchant, and his wife, Ellen.  Courtney was baptized on 7th April 1880 at the Church of Charles the Martyr, Plymouth.  The family home was at Mutley House, Weston Peverell.

Courtney was educated at Marlborough from 1893-1897.  He joined the Lancashire Fusiliers as Second Lieutenant on 16th May 1900 and promoted to Captain on 15th February 1904.  In 1908 he transferred to the Royal Scots.

Courtney married Ethelwyn Florence Mourilyan on 31st July 1911 at Holy Trinity Church, Folkestone, Kent.  They had three children:  Hubert Charles Courtney (1913-1940), Ethelwyn Mary (1916-2005) and James Mourilyan (1920-2010).  Their eldest child was born overseas as Courtney was based overseas.  The family was back in England by June 1914, as Ethelwyn’s Aunt Polly (Mary Anna Robinson) refers to them coming to visit for a fortnight.  In many of the letters, Hubert is referred to just as “Baby”.

As a Captain in the regular army, Courtney was part of the British Expeditionary Force that went out to France just a few weeks after the outbreak of war in August 1914.  He was wounded, mentioned in despatches and awarded the DSO in December 1914, a fact which was regarded with reverence by his wife’s Sladden cousins. The DSO was given for his gallant leading on 12th October of a forced passage of canal north of Vieille Chapelle, he largely being responsible for the success of general operations.  Courtney was invested with the decoration by King George V on 27th May 1915.

Courtney then went on to be employed at the Royal Military College, Camberley from February 1915 to April 1916, on the General Staff, France, from April 1916 to April 1917, as Instructor at the Staff Course, Cambridge, from April to December 1917, on the General Staff, Italy, from December 1917 to April 1918 and in France from April 1918.  He was given the Brevet of Lieutenant-Colonel on 3rd June 1918.  He received the Croix de Guerre and was made an Officer of the Order of the Crown of Italy in 1915.  In the 1919 Birthday Honours list, Courtney was made a CMG (Companion of the Order of St Michael and St George).  The vast majority of the awards were related to the recently ended war and were divided by military campaigns. The massive list contained nearly 10,000 names. Courtney was made his award “For services rendered in connection with military operations in France and Flanders”