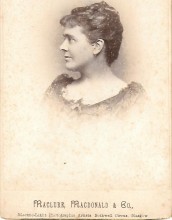 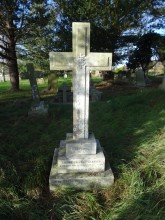 Elizabeth Potter was born at Shepherdswell (or Siberstwold as it is sometimes called), the sixth of seven children of Robert Potter, a farmer, and his wife, Emma.  She was baptised in the village church on 22nd April 1850 and grew up at Place House, Butter-Street Farm.  Robert died in 1862 and Lizzie and her widowed mother and siblings moved to 5 Brockley Villas, Brockley Road, Greenwich.

After marriage, Lizzie and George moved to Scotland where George worked as a Marine Superintendent. The 1881, 1891 and 1901 census returns for Scotland reveal that they lived at Walworth Terrace, 78 Kent Road, Barony, Lanarkshire.

On retirement, the Sladdens returned to Kent in May 1904 where they settled at Petone, Upper Deal, Kent.  Petone was a reference to Petone in New Zealand, a suburb of Lower Hutt, Wellington, where George’s brother, Dilnot, lived.  The name, Petone, from the Maori Pito-one, means "end of the sand beach" – perhaps not the most appropriate name for a house in Deal which has a pebble beach.

George died at Deal in 1909.  Lizzie remained at Petone and is listed in the 1911 census as living there with one servant.

Letters from New Zealand relatives reveal that Lizzie was visiting New Zealand in early 1914; it is probable that, with George, she had paid a number of visits to the country.  This was to be her last big trip as an operation in September 1914 revealed that she did not have long to live.  She died at Deal on 25th November 1914 and was buried alongside her husband at Ash three days later.