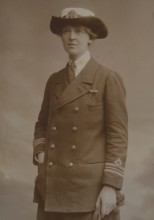 Maud Amy Margaret Wall (1891-1959) was the cousin of Mela Brown Constable (the fiancée of Cyril Sladden).

Maud Wall was born on 12th May 1891 at Bengal, India, the younger of two children of Benson Parsick Wall, an engineer, and his wife, Jessie Margaret (née Wilson).  Maud was baptized on 1st September 1891 at Christ Church, Kasauli, Bengal.

Maud spent her early childhood in India, but the family later moved back to England.  In 1901, Maud was living with her mother and sister and two servants at 6 Richmond Road, Bedford.

In a letter of 25th March 1917, Mela revealed to Cyril that she had just discovered that Maud had been in love with her brother, Cecil Brown Constable, who had died at the Somme in July 1916, but, as they were first cousins, Maud’s parents had not felt it would be a suitable match.  Maud felt his death keenly and the doctor advised a change.  It was therefore planned for Maud to go out to India to stay with her step-grandmother, if she could get a passport.  She was at that time undertaking Voluntary Aid Detachment work.  She wrote to both the India Office and the Foreign Office to try and go out as a VAD, but the response was that it would be unwise to travel by sea, the Admiralty could not undertake the responsibility of women passengers, and the Government issued strict instructions that no women were to be allowed to leave the UK.  A letter received from the India Office in August 1917 saying that a few passports were now being granted via the Cape raised false hopes.  Instead, Maud became Assistant Quartermaster at Birkenhead Red Cross Hospital.

On 28th January 1918, Maud enrolled with the Women’s Royal Naval Service.  She served as a chief officer and was awarded the MBE in 1919.  As Mela said in a letter of 31st January 1919:  “Maud Wall has been made a Divisional Director in the WRNS – for the Chatham Division.  She has ten naval stations under her command which includes about 100 officers nearly all years older than she is.  Isn’t it splendid?  She must have wonderful organizing powers to be given such a splendid post.  Her area includes Ostend – she crosses over there in a destroyer.  Swish!”

After the war, Maud entered the Liverpool School of Architecture and became an Associate of the Royal Institute of British Architects in 1925.  She was the first woman architect to be employed by the London County Council.

On 29th May 1928 at the Church of St John the Evangelist, Holborn, Maud married John White.  She was described as an architect of 35 St George’s Mansions, Red Lion Square; John, of Temple Cowley, was 21 years her senior and an instructor captain in the Royal Navy.

On marriage, Maud moved to Oxford.  She had less than six years of married life as her husband died at Temple Farm, Cowley, on 28th January 1934.  A few months after John’s death, Maud was elected to the City Council as a Conservative, the first woman ever to represent Cowley & Iffley Ward.

At the outbreak of the Second World War, Maud was temporarily recalled to the WRNS, but returned to Oxford in June 1940 for family reasons (her mother was recently widowed after her father had had a tragic accident).  Maud resumed her seat on the council and was elected Mayor of Oxford 1942-1943.  She lost her seat when on the council when she resigned from the Conservative party but was later returned for the same ward as a Socialist.  She became an alderman in 1952 and retired from the council on medical advice in October 1955.

Maud died at The Acland Nursing Home, Oxford, on 26th May 1959, aged 68 and was buried at Cowley three days later.  Her husband had pre-deceased her and her home address was given as 101 Church Way, Iffley, Oxford.  Obituaries appeared in several newspapers.