Jubilee Celebrations Past and Present

Never before in our history has a monarch reigned over us for as long as 70 years.  For the vast majority of people living in this country today, they have only ever lived in the Elizabethan era.  So, as we approach this historic occasion – the Platinum Jubilee celebration of our monarch, Queen Elizabeth II – let’s take a look back at other Jubilee celebrations which have taken place in Badsey.

Few records exist for the early monarchs, but we know that Edward III celebrated his Golden Jubilee in 1376 with a spectacular week-long joust at London’s Smithfield, beginning with a magnificent procession from the Tower of London accompanied by trumpeters.  It’s not known whether there were local celebrations outside of London.

George III is often credited as the first British monarch to mark a Golden Jubilee, celebrating the occasion on 25th October 1809 which was the start of the 50th year of his reign.  The tradition was followed by Queen Victoria and HM Queen Elizabeth II, but after the completion of 50 years.

George III, who reigned from 1760-1820, began the tradition of national and international celebrations.  He celebrated his Jubilee on 25th October 1809.  The celebrations in London were lavish, but the rest of the country also celebrated, as we can see from reports in The Worcester Journal.  On 19th October 1809 the following was written:

Our readers will hear with pleasure, that information from various parts of the kingdom warrants our saying, that there is everywhere prevailing a genuine spirit of loyalty and of warm attachment to our beloved Sovereign; and that the 25th inst will be marked by sincere and ardent feelings of joy.  It is also most satisfactory to find that the substituting a contribution for the poor, or for some charitable purpose, in the place of illumination, is universally approved and adopted.  We are not informed even of one city or town in the kingdom where it is intended to illuminate; but we could produce numerous proposals from different parts of the country, having for their object some charitable design.  This we consider to be a proof of the good sense and benevolent disposition of the nation, of which we may justly boast.  The one mode of showing our joy is rational, most appropriate to the happy event, and will be beneficial to thousands; the other is uselessly expensive, always dangerous, and has sometimes been attended with destructive and calamitous effects.  We find another source of congratulation in observing that the propriety of attending divine service on the 25th inst is so generally felt; this is also creditable to the nation.  And under our present circumstances especially [the country was then at war with France in the Napoleonic Wars], preserved as we have hitherto been from great and impending dangers, standing entire and secure amidst the overthrow of mighty kingdoms, and having an arduous contest still to carry on, we trust, to a successful and honourable issue, it is highly becoming that we should regard it as our first duty to offer up prayer and thanksgiving to HIM by whom kings reign, and at whose disposal is the fate of empires.  With respect to the addresses intended to be presented on this occasion, we are confident that numerous signatures will be affixed to them, everyone feeling that his Majesty has swayed the sceptre of this kingdom for the long period of nearly 50 years, with all the dignity becoming a monarch of so great an empire and, at the same time, in the most constitutional, mild and beneficent manner.  Happy is the nation that has such a prince filling the throne; happy are the people when their sovereign reigns in their hearts.  Sincere should be our gratitude that his Majesty’s life has been so long spared; fervent should be our prayers that it may be continued for years to come.  It is with these sentiments that we anticipate the approaching Day of Jubilee, when our churches will be attended by numbers of loyal subjects and sincere worshippers, and when, with united heart and voice, the prayer shall ascend to Heaven – MAY GOD SAVE THE KING.

In Worcester, the day began with the ringing of the bells of the Cathedral and several other churches, followed by a service at the Cathedral.  At three o’clock “a sumptuous entertainment” was provided at the Guildhall at which “a great number of noblemen and gentlemen of this county and city, with the Corporation, will be present”.  Among the guests was the 3rd Lord Foley, owner of Aldington Manor.  At eight o’clock, the guests proceeded to the College Hall where there was a ball until one, at which point all returned to the Guildhall for an elegant supper which concluded “the proceedings of a day which will shine hereafter in our English annals with conspicuous lustre”.

There were not any illuminations or fireworks, however.  Collections for the benefit of the poor and charitable purposes were being made in several parishes in Worcester, but many of the donations were given on the express condition that there were no illuminations.  The Mayor and Justices also ordered their servants and constables to parade the streets and to take into custody anyone discharging guns or letting off fireworks of any description, being thought too dangerous.

It is likely that there would have been some form of celebration in Badsey, but we have no documentary evidence to confirm this, and it is not clear who might have been the chief organiser.  The Vicar at the time was the absentee Reverend Charles Phillott, so the parish was in the care of the Curate, William Dowell, who had arrived the previous year and stayed for only two years.  The Lord of the Manor was Edward Wilson, but he was aged only 16 in 1809.  With celebrations taking place throughout the land, it is tempting to assume that, as a minimum, there would have been bell-ringing and a special church service and perhaps entertainment of some kind.

Queen Victoria reigned from 1837-1901.  Her Golden and Diamond Jubilees were times of public celebration.  In Badsey, Thursday 23rd June 1887 began with a procession along the High Street led by Toddington Brass Band, St James’ Church was packed for a special service.  This was followed by dinner, sports and tea, dancing in the evening, concluding with a grand firework display.  The Diamond Jubilee celebration ten years later followed a similar format in Badsey, as can be seen by the handwritten schedule drawn up by Julius Sladden.  Full details of these festivities may be read in the following articles:  Queen Victoria’s Golden Jubilee, 1887 and Queen Victoria’s Diamond Jubilee, 1897.

It was not until 1935 that the nation was able to celebrate another Jubilee with the Silver Jubilee of King George V.  Edward VII had succeeded his mother, Queen Victoria, but reigned for only 9 years 104 days.  Edward’s second son, Prince George Frederick Ernest Albert, ascended the throne as George V (the first son having died in 1892) on 6th May 1910 and was crowned the following year on 22nd June 1911.

Whilst nine earlier monarchs had reigned for 25 years or more, George V was the first to celebrate the occasion which took place on 6th May 1935, the 25th anniversary of his accession to the throne.  The Jubilee day was declared a bank holiday and celebrations were held across the United Kingdom with garden parties, pageants and sports events.  Further details of this event can be read in this article, King George V’s Silver Jubilee, 1935.

Her Majesty Queen Elizabeth II became Queen of the United Kingdom and other Commonwealth realms on 6th February 1952.  Her coronation took place the following year on 2nd June 1953.

Following in the tradition started by her father, Queen Elizabeth celebrated her Silver Jubilee in 1977.  The Jubilee was celebrated with large-scale parties and parades throughout the UK and Commonwealth during 1977, culminating in June with the official "Jubilee Days", held to coincide with the Queen's Official Birthday (second Saturday in June). The anniversary date itself was commemorated in church services across the land on 6th February 1977, and continued to be for the rest of that month. In March, preparations started for large parties in every major city of the UK, as well as for smaller ones for countless individual streets throughout the country.  In Badsey, the village celebrated on Thursday 2nd June (the anniversary of the coronation) with a street procession, a Jubilee Queen, flying the flag from the Wellingtonia tree, races, a pig roast and a pensioners’ meal.  Photos of the occasion may be seen at Queen Elizabeth II’s Silver Jubilee – the day in pictures and Queen Elizabeth II’s Silver Jubilee – the day in poetry.

For the Golden Jubilee in 2002 there was a Fun Day at the cricket ground on the Bank Holiday Monday, 4th June, street parties and a special Golden Jubilee School Fete – see Queen Elizabeth II’s Golden Jubilee, 2002.  The Wellingtonia tree, which had played a prominent part by flying the flag in the Silver Jubilee celebrations of both King George V and Queen Elizabeth II, was sadly no more as it was felled in 1980 due to rot having set in.

The Queen’s Diamond Jubilee took place in 2012.  Not since 1897 when the present Queen’s great-great-grandmother, Queen Victoria, celebrated, had there been an opportunity to mark a Diamond Jubilee.  The events of the weekend of early June 2012 may be viewed here:  Queen Elizabeth II’s Diamond Jubilee, 2012.

In a few weeks’ time, we shall celebrate the Platinum Jubilee of Her Majesty.  Never before in the history of this country has a monarch reigned for over 70 years.  Please send us your photos and stories of Jubilee events in Badsey, Aldington and Wickhamford – either send to history@badsey.net or post on our Facebook page. 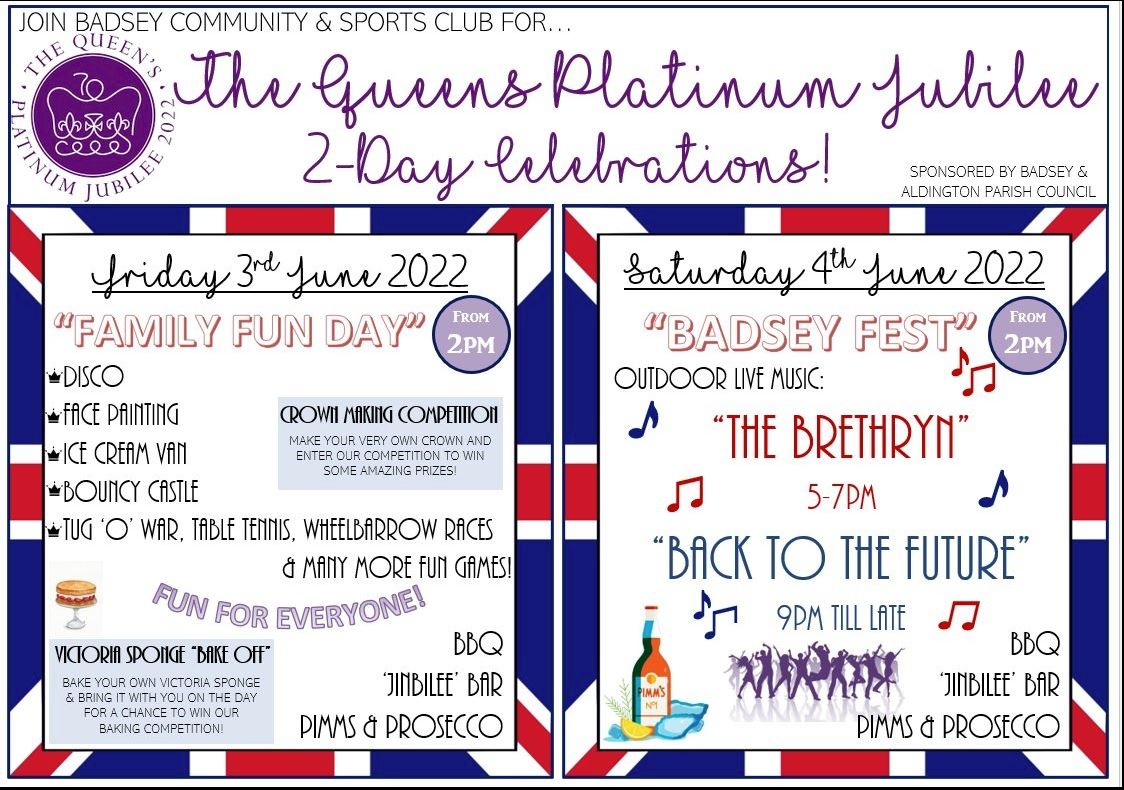