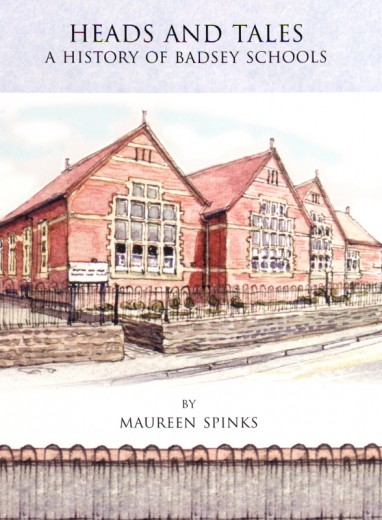 John Howe, former Head of History at the University of Gloucestershire, wrote this review of Heads and Tales - A History of Badsey Schools by Maureen Spinks published by the Badsey Society.

In national history we usually have a good idea of what happened, so historians can concentrate on the more controversial aspects of causes and consequences. The local historian in contrast has first to discover what happened and then to explain why. He or she also has to explore the similarities and differences between the local and national trends. In education, for example, the expansion over the last 200 years of education for ordinary working folk is well known. A series of Commissions of Enquiry and Acts of Parliament reflects changing ideas about what was needed and how it should be provided, but only close study of local history can show us what happened in reality.

"Heads and Tales: A History of Badsey Schools" is an excellent example of what can be achieved. Badsey School is remarkable in having an almost continuous history of 150 years and over 100 years on the present site, still in what is mainly original building. Maureen Spinks gives us a fascinating narrative of those years: the start as a National voluntary school; the coming of the School Board in 1893 and its replacement by the County Council LEA in 1903. In 1939 the older classes moved to secondary school and in 1975 it became a first school. Mrs Spinks populates her story with the people who shaped the school. Headteachers, governors and staff are brought to life and, especially for the more recent times, there are lively memories of the children. The buildings are described – it is striking that overcrowding and leaking roofs were problems shared by Headteachers of both centuries! We also learn about what the children learnt, from the centrally-driven payment by results system of the mid 19th century through to the return of central control with the National Curriculum of 1989.

National comparisons are interesting. For example, Maureen Spinks shows clearly the mounting pressure from Her Majesty’s Inspectors to improve buildings and raise standards generally which caused growing problems for voluntary schools and led in part to the 1902 act, but Badsey was exceptional in that the voluntary school closed in May 1893 and reopened in September as a Board School because the voluntary managers could not find the capital to keep going. A strength of the book is its awareness of the local social context, and Mrs Spinks suggests that the failure of the voluntary system may relate to the growth of small-scale market gardening in the area and the consequent absence of sufficient wealthy gentry to support the church school.

One or two general issues perhaps deserve more discussion. The bitter controversy over the 1902 Act must surely have had some impact in the locality. This reviewer wonders why Worcestershire was so progressive in ending all-through elementary schools. Badsey was reorganised in 1939, 20 years before elementary schools disappeared from Gloucestershire! The controversy over 11-plus selection and comprehensive schools figures only briefly, though of course this affected what happened after the children left Badsey. The move to a first/middle/high school pattern in 1975 was more serious and one wonders why the County Council chose this relatively rare pattern.

The book is based on impressive knowledge of a wide range of documentary sources. The familiar school log books, managers’ minutes, admissions registers and so on appear (the school is fortunate in the survival of so much) but other sources including the local press, documents at the Public Record Office, oral evidence and a remarkable MSc thesis from 1931 are also well used. A particular strength of this book lies in the illustrations. Putting faces to the names of staff and governors is helpful and the plans and pictures clearly show the development of the building and site. This reviewer would have liked to see full footnoting so that documentary evidence could be followed up, but in fairness it should be said that the sources of evidence are clear from the text; the bibliography does not, however, locate oral and memoire sources.

The volume ends with a useful and through series of appendices listing, for example, staff, governors and Head Boys and Girls. The detail is impressive, as indeed is the detail and care apparent throughout the book. The work was clearly a labour of love for Maureen Spinks who has produced a history which will surely fascinate all who know the community of Badsey and provide useful insights for those like this reviewer for whom the village has come alive only through the pages of this book.