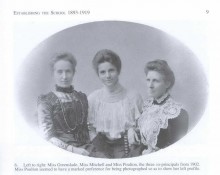 Selina Poulton is picture on the right with the other co-principals.
Known As
Miss Poulton; Selina
Biographical Details

Lily Selina Poulton (1851-1942), known as Selina, was the sister of Georgina Savory who was married to Arthur Savory of Aldington Manor.

Selina Poulton was born at Reading on 30th September 1851, the eldest of three children of William Ford Poulton, an architect, and his wife, Georgina Selina (née Bagnall).  She grew up in Reading but, by the time of the 1881 census, she was living at Wycliffe Hall, Oxford, described as an artist and painter.  From at least 1885, she was living with her parents at Beechworth, Malvern, William and Georgina having moved there on his retirement.

It is thought that Selina came as governess to some of the Sladden children for a short time.  Selina was also a musician as well as an artist.  Both she and her sister, Georgina, were accomplished singers, and gave a concert in 1885 in aid of the Badsey Church restoration fund.

In the mid 1890s, Selina Poulton became a co-foundress and one of three co-principals of Malvern Girls’ College.  At the time of the 1901 census, Selina was shown as still living at Ivydene, together with Isabel Greenslade, one of the co-founders; Ivydene had been turned into a boarding house for the new school.  By 1911, Blanche Mitchell, one of the other joint principals, was also living there.