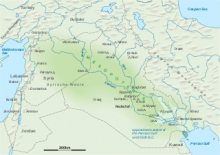 Map showing the extent of Mesopotamia.

The ancient land of Mesopotamia, meaning the land between the two rivers, was given its name in the 5th century BC by Herodotus. It encompasses the land between the Euphrates and Tigris rivers, both of which have their headwaters in the Armenian Highlands. It contains all of modern-day Iraq plus Kuwait, parts of south-western Iran, southern Turkey and north-eastern Syria.

The land is for the most part desert and very flat. The rivers flood the plains when the winter snows in the northern mountains thaw. The small towns and villages that existed along the river banks in 1914 were generally constructed several feet above water level. There were no roads, so all transport had to be by boat along the rivers.

For centuries before the Great War, Mesopotamia had been part of the Turkish Ottoman Empire. Turkey's entry into the war on 29th October 1914 immediately prompted Britain to open a new military front in Mesopotamia. Although this campaign began simply to secure oil supplies, some politicians believed that victory over the Turks would be a less costly way towards defeat of Germany than the painful battering on the Western Front. The force fighting in Mesopotamia was principally one of the Indian Army, with only one solely British formation, the 13th (Western) Division. It was part of this Division that Cyril Sladden and the 9th Worcestershire Regiment became involved in the Mesopotamian Campaign from February 1916.

British forces suffered a defeat at the hands of the Turkish army during the Siege of Kut (1915–16), but finally won in the Mesopotamian Campaign with the capture of Baghdad in March 1917.

After the war, the Ottoman Empire was divided up, and the British Mandate of Mesopotamia was established by League of Nations mandate. This area of the Middle East continued to be known in the west as Mesopotamia until the modern state of Iraq became established following the end of the British mandate, which was officially in 1932.