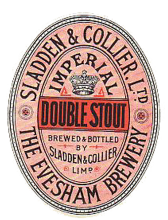 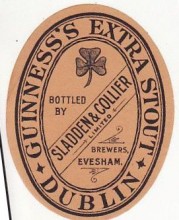 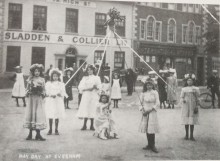 May Day dancers in Evesham High Street outside the Brewery in 1913. 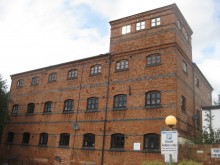 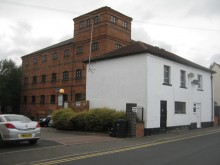 Alex Naughton, the great-great-grandson of Julius Sladden, has investigated the history of Sladden & Collier Brewery and written the article below.

Sladden & Collier Ltd was located at The Brewery, 3 Brick Kiln Street, Evesham.  There were also shop premises on the High Street in Evesham which were emblazoned with the words "Sladden & Collier".

The former Sladden & Collier brewery in Evesham is the most impressive survivor of the town's brewing industry (once including Cooke & Sons and Rowlands as well as Sladden & Collier).  It is a substantial late 19th century polychromatic brick structure of four storeys with a five storey tower.  It was sold to Cheltenham Original Brewery in 1927 and closed in 1937 and since has been converted into flats.  All three remnants of Evesham’s brewing industry lie within the Evesham Conservation Area.

Cheltenham Original Brewery changed its company name to the Cheltenham and Hereford Breweries in 1945 following the acquisition of the Hereford and Tredegar Brewery Ltd. The company, trading as Cheltenham Brewery Holdings Ltd., merged with the Stroud Brewery in 1958 to form West Country Breweries Ltd. The brewery, along with a tied estate of almost 1,300 public houses was acquired by Whitbread's in 1963.

Whitbread was first listed on the London Stock Exchange in 1948. Between 1961 and 1971, Whitbread's output increased from 2.1 to 7.4 million hectolitres and it became Britain's third-largest brewer by output. Whitbread Group Plc decided in 2001 to sell all its breweries and brewing interests (Whitbread Beer Company) to Interbrew, now known as InBev. Whitbread-branded alcoholic beverages are still available in the UK, such as canned Whitbread bitter, but these are not produced by InBev, merely produced under licence by other producers. InBev controls the use of the Whitbread brand, and the hind's head logo, for use on beverages. In 2002 Whitbread sold its pub estate, known as the Laurel Pub Company, to Enterprise Inns.

In 2000, Interbrew acquired Bass and Whitbread in the UK. Interbrew was the third largest brewing company in the world by volume. InBev was created in 2004 from the merger of the Belgian company Interbrew and the Brazilian company AmBev.  In 2008, the merger of InBev and Anheuser-Busch was completed, creating Anheuser–Busch InBev, expanding on InBev's previous status as the world's largest brewer, now creating one of the top five consumer products companies in the world.   In October 2015, Anheuser-Busch InBev announced a successful all-cash bid to acquire multinational competitor SABMiller for £69 billion ($104 billion). If successful without divestments, the combined company would control 30% of the global market and have a dominating 60% U.S. market share.  SABMiller counts Peroni, Pilsner Urquell, and Grolsch among its stable of brands, while AB InBev produces Budweiser, Stella Artois, Corona, and Beck's. However, to get the merger deal past global regulators, AB InBev has already agreed to sell SABMiller's Peroni, Grolsch and Meantime brands to Tokyo-based drinks company Asahi. The merger is set to be completed by 10 October 2016 after global regulators approved the deal. This will create the first truly global brewer and the new company will take the name AB InBev.

Virginia Stenson has provided photographs of a penknife/letter opener, about 6 cm in length, with the words, “Only of Sladden & Collier Ltd, Evesham” on one side and “Trump Card Whisky” on the other side.

It was found amongst items belonging to her husband’s aunt, Mercy Rimell, who died in August 2016 (Mercy was the widow of Fred Rimell, the National Hunt racing trainer and jockey).  It appears to have been a promotional item given away by Sladden & Collier’s Brewery.  Trump Card Whisky could have been the name of a whisky sold by the brewery, but it is also a whisky tasting card game played with 36 cards.