My own dear Cyril

I am so sorry I did not manage to get off a second letter to you last mail but I think you’ll forgive me when I explain.

On Monday, as you know, I went on night duty. Instead of going to B10 as previously arranged. I was told to go and ‘’relieve’’ in B1 and B2, two very heavy wards. The sister in B10 has not yet come off night duty.

We hardly stopped working all night, so there was no time to begin a letter to you. Since Sunday I had noticed that the index figure of my left hand was painful and during Monday night it became worse and throbbed a good deal. I reported the matter to the night superintendent, who reported it to Matron in the morning.

Matron said I must have my finger lanced as it was septic under and down the quick of the nail. I had been up 24 hours at a stretch and was feeling about done and not in the least inclined to tramp over to the hospital again to have my finger opened.

However I went and was told to wait in the office until a surgeon could see me. In a few moments the Assistant Matron asked me to go over to the hostel with a message. This was the last straw, especially as it was pouring with rain. So I thought to myself I’ll take the message but nothing will induce me to return – for I still had to move all my belongings to the night house across the garden, and when was I going to bed?! When I did not re-appear at the office a frantic telephone message came through commanding my immediate presence.

The house nurse brought me the message and I told her she could put the reply in what words she liked so long as she impressed the fact that I refused to be kept up any longer running messages after a heavy night’s work and no sleep the previous day. In the end a surgeon came over to the hostel about 12.30 pm and opened my finger. I had no orders that I was not to go on duty so after trying to rest I got up again to go on duty with the night nurses, only to be told that I need not to go on that night. I was wild. If they had had any sense or consideration they would have let me know before I got up. This finger has made me feel very seedy and not inclined to write letters.

I have not been ‘’on the mat’’ as I expected, for ‘’insubordination’’! Instead, I received a very nice apology from the Assistant Matron!

Apart from my own feelings in the matter, I consider that so very little consideration is shown to nurses that when one has an opportunity for pointing this fact out, it is as well to take advantage of it.

I daresay as an officer with three stars you will feel it your bounden duty to point out to me that even though I may have had cause to murmur, nevertheless ‘’insubordination’’ is an unforgivable sin in the army!

I don’t know how long I shall be off-duty but I imagine until the wound is healed.

At present it is an open sore. There are seven of us off with septic fingers, or arms or feet. I’d no idea how seedy one can feel from so small a thing.

I wrote to Badsey and told them I was off duty and asked if any of them wanted to do any shopping, to come over and see me too! Ethel and Betty came over yesterday and took me to lunch and tea and we shopped in between. A good meal is worth a lot these days! The food here is scarce and not very palatable very often.

Arthur goes back today. Ethel said Mary was very down in consequence. I keep thinking of them. It will be a horrible wrench for them both but they will have the memory of these three weeks to look back to which will be something. Our memories, sweet though they be, are very far back ones, are they not darling? I wish we could have a few fresh ones – don’t you?

Betty bought a very sweet grey silk dress to wear at some ‘’old girls’’ jollification next week. She is going up to Highgate and then to Sydenham. They are expecting Wilfred at Badsey for two or three days from Monday or Tuesday next.

I came across a wounded London Scottish private the other night. He told me that he knew Cecil was not killed that day. He had just heard from a “missing’’ London Scot private, who is a wounded prisoner of war in Germany. He may yet hear from Cecil.

A man was heard of as alive and a prisoner only the other day, who was captured at the Battle of the Marne. He was not allowed to write but was seen on a station by an interned civilian who was on his way home having been discharged and this man brought a message from him to his mother. At this rate one need never give up hope.

I heard from Nurse Sampson today. The poor old girl has failed in her 3rd year exams and has been told she must leave the General. ‘She is away on her annual holiday at present and has just received the bad news. She is terribly upset – she has no home and money beyond what she earns. I have written and told her to buck up and that I’ll see if I cannot find her a job. I am going to put her into communication with a Society in London, which undertakes to train women for jobs and finds them a job. For the first month they put you up free of charge in a local hostel in a good part of London to give you time to look round and undertake to find you a job at the end of the month. I’m afraid it is a Society run by Suffragettes but nevertheless they do a lot of good. I know it is quite genuine because I know a girl who is now earning sufficient to keep herself, in a bank, and she started without a penny to her name, and this Society helped her.

I also heard from Uncle Fred this morning. He sent me a valuable Gold Mohur coin attached to some Indian jewellery, which he said Uncle Harry asked him to give me. He suggests having it made into a wearable piece of jewellery but thinks I’d better enquire first if this will detract from its value.

I am very glad to have something which belonged to Uncle Harry personally. Uncle Fred goes back to India next week.

Wilfred has been staying there for a day or two. He hopes to see me some time during his holiday. I heard from Mother today that she is crossing to Folkestone on Monday or Tuesday next. I don’t know whether this will mean Wilfred will not be able to go to Badsey as he intended doing.

A friend of ours took Barbara to Paris for a fortnight and another friend gave her 50 francs to spend. Isn’t she a lucky girl?!

Two other nurses and I are going to church this evening – it is nice to be free to go.

My finger is getting on but has not healed up yet so I suppose it will be a day or two before I go back on duty.

No mail has come in this last week – I do hope it will come in early this week – I get quickly starved for news of you.

Miss Musson has a nephew in the Engineers in the 13th Division. She told me this when enquiring after you and Arthur the other day. Her nephew says that the soldiers out there are worn out and he thinks they cannot be expected to stand another strenuous campaign.

Oct 2nd
It has pelted with rain all day which has not been exactly exciting for the nurses on the sick list who would be able to go out. I comforted myself with the reflection that perhaps a letter, overdue from last week, from you, might turn up today but I’ve had no luck - and I am simply starving for news. A new sort of Territorial Nurse has turned up today, to be called an Assistant Staff Nurse, next door to a Sister. There are others like her coming. The qualification required for this exalted position is that the nurse has had 2 years training in one and the same General Hospital, straight on end. They are paid £30 a year instead of £20 a year that we others get.

Personally I am quite happy to remain in my humble sphere, but there is a girl here who has had over 3 years’ training, but not all in one hospital, plus sixteen months here and yet she is not allowed to be an Senior Staff Nurse and only receives £20 a year salary. These fresh nurses need never have been inside a military hospital, yet they are given positions over a girl of 3 years’ civil training + 16 months in a military hospital. Queer things are done in the Army in this respect.

I pity the newcomers for they are neither fish, flesh nor good red herring – neither sisters nor nurses in the sense of the VADs and we others who joined up at the beginning, and their position will be a very difficult one.

For myself, I feel I simply want to do something for my country and am content to work wherever my hands find work to do, so am not ambitious to be called by any special name, although possibly the work I have to do is the same as these new nurses. I fancy you’ll say that’s Mela all over, no eye for the main chance, no business capacity etc, etc. She needs me there to point out how useful an extra £10 a year would be etc, etc!!! I don’t care, I’d rather remain happily in my humble sphere than push myself to the front and probably be snubbed for my pains. Besides a crisis like this is not the time to bring forth personal grievances, it would be like the miners going on strike.

Oct 4th
I was on duty last night ‘’specialling’’a bad pneumonia patient. As he was delirious I had my hands full and not a moment to finish off this letter. Generally if a patient sleeps even ½ an hour it gives me a break.

All my love. Sweetheart. Hoping the mail will come in soon. God bless you.

Your ever devoted
Mela 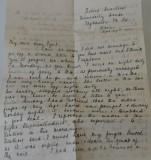