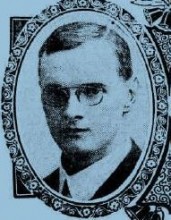 Arthur Francis Savory Sladden (1884-1966) was the fifth child of Julius and Eugénie Sladden.

Arthur was born on 21st February 1884 at Seward House, Badsey, and baptized on 23rd March 1884 at St James’ Church, Badsey.  Arthur was educated at Christ College, Brecon, and afterwards at Jesus College, Oxford, where he studied medicine; he became registered as a doctor in July 1910.  After qualifying, Arthur then took time out to go digging in Cyrene, Libya, being there from October 1910 to April 1911.

On his return to England, Arthur took up an appointment at the General Hospital, Birmingham, and then moved to London to St Bartholomew’s Hospital.  When in London, he lived with his siblings, Jack, Kathleen, George and Cyril at 12 Charleville Circus, Sydenham.

On 15th April 1914, Arthur married Mary Christabel Williams at Dowlais, Glamorganshire.  The Headmaster of Christ College was one of the assisting clergy.  Arthur had met Mary through his old schoolfriend and fellow doctor, Hubert Phillips, who was married to Mary’s older sister, Irene.

On the outbreak of war, Arthur enrolled with the Royal Army Medical Corps and was based in France, primarily in Rouen where he was Assistant Adviser in Pathology.  At the end of the war, Arthur was awarded Medaille des Epidemics (en argent).  This was a medal awarded by the French Ministry of Health to people who had distinguished themselves by their dedication during periods of epidemic diseases.

Arthur and Mary had two daughters and one son:  Dorothy Mary (1915-1995), Joan Frances (1919-1961) and Robert Arthur (1921).  After the war, Arthur took a job as pathologist at Swansea Hospital.  The family lived at Cheltenham House, 155 Eaton Grove, Swansea.  After retiring, Arthur and Mary moved to Northampton.

Arthur died at Flat 4, 49 East Park Parade, Northampton, in July 1966, aged 82.   His death was reported in the Parish Magazine of September 1966:  “Our sincere sympathy with Mrs Sladden and all members of the family.  Dr Arthur Sladden was a welcome figure in the village on his occasional visits, always taking a great interest in the church and home of his boyhood.”  His daughter, Joan had pre-deceased him.  Mary died in 1981 at Northampton; their ashes are in Badsey churchyard.