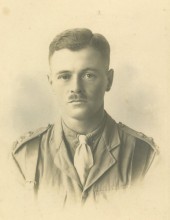 Wilfred was born on 14th April 1891 at Normanby, Lincolnshire, the third of four children of Albert Edward Brown Constable, the Curate of Claxby with Normanby, and his wife, Clara Emily (née Wall).  Wilfred was baptized on 31st May 1891 at St Matthew’s Church, West Kensington; the baptism was conducted by his father.  Wilfred was the only one of the four children born in England, all the others being born in India.  At the end of 1893, the Brown Constables returned to India.

Wilfred, along with his older brother, Cecil, was educated at Sir William Borlase's Grammar School, Marlow.  He may have been a boarder, as there were then boarders at the school.

On 30th June 1906, Wilfred and Cecil left Southampton for Cape Town, South Africa.  At some point he attended St John’s College, Johannesburg.  He later became a schoolmaster at Hilton College, Natal, which had been founded in 1872, and was a prestigious boarding school for boys.

In November 1914, Wilfred became engaged to a Scottish girl, Mary Campbell, who was the nurse in charge of Hilton College Sanatorium.  He had been taken there in an unconscious condition having had an accident while out riding; Mary nursed him back to health.

Wilfred enlisted at the end of 1914 and was very soon promoted to Lance Corporal.  At the beginning of 1915 his regiment was sent to German SW Africa.  In April 1915, Wilfred had a surprise meeting with his fiancée who had arrived at the front in German SW Africa to undertake nursing.  Two days after she arrived at the town where she was billeted, Wilfred’s regiment unexpectedly marched into that very town.

However, after a few months, the relationship was beginning to take the strain of being parted as a letter of 2nd October 1915 reveals that Mary only wrote to Wilfred about once a month.  Wilfred therefore decided not to go to England with the South African contingent, but to work at getting a home together with Mary.  However, by December 1915, news came that Mary had broken off the engagement.

Wilfred sailed to England at the end of March 1916 with the South African contingent to go to the front.  Wilfred visited Mela at Seward House, Badsey, in July, and met the Sladden family for the first time.  This was shortly after they had received the news that their brother, Cecil, was reported missing. He had the opportunity to see his sister on several occasions in the summer of 1916 as he was still in training in England.

With effect from 26th September 1916, Wilfred was gazetted from the Special Reserve of Officers to be 2nd Lieutenant (on probation) with the 3rd Battalion Essex Regiment.  He joined his regiment at Felixstowe on 13th October.

At the end of February 1917, Wilfred made a final visit to Badsey where Mela was staying, before going overseas.  Mela was very fearful about losing another brother:  “He is the last boy in the family of the name and unless Uncle Fred marries and has a son, if anything happens to Wilfred the family dies out.”  Wilfred and Mela went to tea with Mrs Ashwin of Pool House and sang to her:  “He has a beautiful baritone voice and is very musical.”

Wilfred had been keen to get into the Indian Army.  He heard in March 1917 that his transfer into the Indian Army had been accepted.  Wilfred sailed from Southampton on 2nd April 1917 on the Cameronia.  On 15th April the Cameronia was torpedoed by a German U-boat en route from Marseilles to Alexandria.  Some 140 people lost their lives, but Wilfred was one of the fortunate ones and was taken to Malta.  Whilst in Malta, he succumbed to German measles, so did not proceed to India with his fellow officers on the Transylvania (thus avoiding the fate of being torpedoed for a second time).

Wilfred left Malta at the end of June for Alexandria and landed in Bombay on July 28th where he was posted to the 149th Infantry.  With effect from 26th June 1917, Wilfred was gazetted 2nd Lieutenant.  By September 1917 Wilfred was attached to the 94th Russell’s Infantry, Nowshera.  In early 1918, Wilfred was sent to Mesopotamia.  In June, he found himself in the vicinity of the 9th Battalion Worcestershire Regiment and was able to meet up with his future brother-in-law, Cyril Sladden.  Wilfred served in the Indian Army from 1917-1921.

Wilfred died in the Dartford district of Kent in 1945.  His widow, Winifred, died on 12th February 1964 at Tollesbury, Essex.