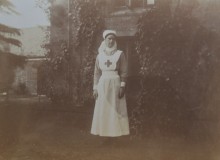 Ethel Narcisse Sladden (1882-1961), was the fourth child of Julius and Eugénie Sladden.  Ethel was born at Seward House, Badsey, on 21st November 1882 and baptized in St James’ Church, Badsey, on 17th December 1882.  She was educated at St Stephen’s High School, Clewer, Windsor.

During the First World War, Ethel was a Voluntary Aid Detachment at Abbey Manor Hospital, Evesham, and also served as a VAD during the Second World War.

Ethel died at Seward House on 17th July 1961 following a stroke; she was buried on 21st July.

The following report appeared in the Parish Magazine of August 1961:  “In the death of Miss Ethel Sladden, after a fatal stroke on July 17th, there has passed from the Badsey scene one of the most influential personalities in the life of our community and the formation of its outlook in the past sixty years.  Ethel Sladden exemplified the best Christian traditions of the English country gentry as she had learnt them from her parents and elder sisters:  duty to God and country, generosity, responsible use of talents and education in the service of the community, self-sacrificing care for the welfare of others.  Her public work, though considerable, she would probably have deemed the least important of her activities.  Her work for the Nursing Association and for the Red Cross (she started the Badsey Detachment and was later awarded the Royal Red Cross Medal) was not so significant as her own considerable nursing ability which caused people (before there was a district nurse) to run round to her in any kind of emergency requiring first aid.  Her contribution to the work of the PCC was notable, but she was more concerned herself with getting the donkey work done behind the scenes, such as cleaning and trimming the oil lamps of the church, a not very pleasant task which took two hours or more each week.  The teaching which she imparted in the Sunday School for more than 40 years, and her leadership of the Girls’ Friendly Society, were no doubt of abiding worth, but more valuable still was the way in which she remained in close personal touch with every pupil in their later lives.  She had a tremendous capacity for taking pains (in 1910, as treasurer of the Hunt Memorial Fund for the erection of the churchyard cross, she personally collected over 400 subscriptions), but more impressive still was her capacity for taking pain.  She was one who knew how to “take it” in a dogged English way, without complaining.  Above all, she would not let the increasing bodily suffering an infirmity of her later years interfere with what she considered her primary duty in life, the worship of God.  The strength and love which she received through the Sacraments of her beloved Church were the hidden source of her indomitable endurance and her warm friendship and care for the well-being of individuals.  She loved people, because she loved her Lord, who had ‘compassion of the multitudes’.”

A further appreciation appeared in September 1961:  “An obituary notice was published in our August number, but the Editor has since received the following appreciation, which he is glad to print:  On behalf of members of the Badsey, Aldington and Wickhamford Nursing Association and past members of the British Red Cross Society, Badsey Detachment Worcester 12 in particular, sincere sympathy is extended to members of her family upon the death of Miss E N Sladden.  We recall with gratitude our association with her, and her great enthusiasm and interest in the nursing profession in general, her kindly disposition to all members, and the very many happy times spent at Seward House for lectures in first aid and home nursing, examinations and social occasions.  Her long association with the British Red Cross Society goes back to the First World War, when she became a VAD at Abbey Manor.  Afterwards, when the local Detachment was formed, she was appointed Commandant.  Members under her supervision became fully trained and ready for emergencies and the Second World War, doing duty at both the local hospitals and at first aid posts.  Later on, ill health forced her to retire from active participation, but she continued her interest in the BRCS.  In appreciation of her long association with the Society, the honour of life membership was conferred upon her by the County Authorities.”

And in the October 1961 magazine there was a further appreciation:  “It was characteristic of Ethel Sladden that she made provision in her will for the parish church, which she loved so much.  The vicar, Churchwardens and PCC have been gratified to hear that she bequeathed to St James’ Church, Vine Cottage and the land adjoining it.  It had always been her hope that she might at some time acquire Rose Cottage and be able to present the pair of cottages to the church as a complete entity.  As it happened, Rose Cottage did not come on the market until just after her death.  With great generosity, Miss Juliet Sladden and her brothers, in order to carry out their sister’s intention and as a memorial to her, have purchased Rose Cottage as a gift to the church.  We are most grateful to the Sladden family for this splendid gift.”