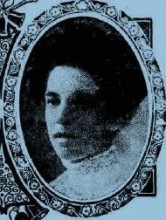 Mary Sladden in 1914 on the eve of her wedding.
Known As
Mary
Biographical Details

Mary Williams was born on 27th April 1887 at Beaufort, Breconshire, the third of nine children of the Reverend Llewelyn Morgan Williams and his wife, Georgina (née Rowlands).  By 1890, when Mary’s younger sister, Georgina Millicent, was born, the family was living at Dowlais where their father was the Rector.

At the time of the 1911 census, Mary was a Governess in the Dyson household in Craigston, Exmouth, Devon.  The Reverend Francis Julian Dyson had eight children and Mary was acting as Governess to his three youngest daughters.  She was already engaged to Arthur Sladden by this time, whom it is assumed she met through her older sister, Irene.  Irene was married to Hubert Phillips who was an old university friend of Arthur’s from his days at Jesus College, Oxford, and was a fellow doctor.

Mary and Arthur married on 15th April 1914 at Dowlais.  The Headmaster of Christ College was one of the assisting clergy.  Mary then joined Arthur in London, who was working at St Bartholomew’s Hospital.  They lived in a rented flat at 9 The Manor House, Marylebone Road.

Their first few months of married life were shattered by the outbreak of war in August 1914.  Arthur enrolled with the Royal Army Medical Corps and spent most of the year in France.  Arthur was not happy about his new bride remaining alone in London so, for the duration of the war, Mary spent a fairly itinerant lifestyle, dividing her time between her parents in Dowlais, her sister and brother-in-law in Port Talbot, her parents-in-law in Badsey, her brother and sister-in-law in Sydenham, before finally renting a place in Wales.

After the war, Arthur took a job as pathologist at Swansea Hospital, and the family lived at Cheltenham House, 155 Eaton Grove, Swansea.  After retiring, Arthur and Mary moved to Northampton.

Mary died in October 1981 at Northampton, having survived Arthur by 15 years.  Her ashes were placed in Badsey churchyard.