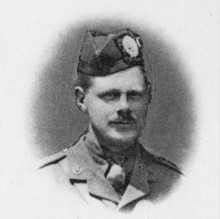 Cecil was born on 13th September 1889 at Allahabad, Bengal, India, the second of four children of Albert Edward Brown Constable, a chaplain, and his wife, Clara Emily (née Wall).  When Cecil was eight months old, the family returned to England when Albert was appointed as Curate at Normanby, Lincolnshire.  At the end of 1893, the Brown Constables returned to India.

From 1902-1906, Cecil was a pupil at Sir William Borlase's Grammar School, Marlow.  He may have been a boarder, as there were then boarders at the school.  In his final year he was Head Boy and Captain of cricket.

In 1914, Cecil returned to England, intending to make this his intended future residence.  He arrived in Southampton on 15th May 1914 on the Union Castle Ship Galeka, having set sail from Cape Town; he was described as a civil engineer.

On the outbreak of war, Cecil joined the 1st/14th (County of London) Battalion, London Regiment (London Scottish).  “I wonder how he’ll look in kilts!” remarked his sister, Mela.  On the evening of his 25th birthday he received a telegram telling him to report for duty.  He was then told to be ready by 9 am the next day; he had no kit and had to buy everything before roll call.  He left for the front on 16th September 1914; he was chosen with 160 other men from the 2nd Battalion to make up the numbers of the 1st Battalion London Scottish.

In January 1915 Cecil received a commission in the 1st Battalion as Second Lieutenant and returned home in early February for a short leave in order to get his new uniform.

In April 1915 he was hospitalized at Wimereux due to having measles.  His mother and sister, Barbara, were able to visit him and chat to him through the door, as they lived not far away in Boulogne.

Cecil was home on leave in September 1915 when he was able to meet his sister, Mela.  A week or two later, Mela heard from London Scottish soldiers who were admitted to Bournbrook Hospital that Cecil had been wounded, but fortunately it turned out to be untrue.  By the end of November he was out of the trenches and quartered in a Bomb school, instructing men in the art of bomb throwing.  He was home on leave again in February 1916 and stayed for a few days at Seward House where Mela was staying.

On the first day of the Battle of the Somme, 1st July 1916, Cecil’s battalion took part in the attack on Gommecourt and Cecil lost his life, aged 26.  He was in command of ‘D’ Company of the 1st/14th.  By 10.15 am, ‘D’ Company “had lost all Officers and NCOs and ceased to exist as a separate unit”.  On that fateful day, the 1st/14th (County of London) Battalion suffered a total of 590 casualties.  Cecil was initially reported as “wounded and missing on 2 July 1916”.  The family received news on 8th July, Mela saying:  “It gave me an awful shock for as Cecil has been out so long and unharmed it had seemed as though he bore a charmed life.”

In the immediate aftermath and in succeeding months, the family made every attempt to check whether Cecil was still alive as conflicting reports were received.  For many months the family thought that he might have been taken prisoner.  Whilst by September 1916, Mela had come to the conclusion that her brother had died, their mother never gave up hope.  Eventually it was confirmed that, for official purposes, his death was assumed to have occurred on 1st July 1916.  The official announcement of his death appeared in The Times of 1st March 1917.

In a letter of 25th March 1917, Mela revealed to Cyril that she had just discovered that Cecil had been in love with Maud Wall but, as they were first cousins, Maud’s parents had not felt it would be a suitable match.

Cecil was buried at Gommecourt British Cemetery No 2, Hébuterne, Pas de Calais.  He is commemorated on the war memorial in the chapel at Sir William Borlase’s School, Marlow, and on the Roll of Honour at St Mary & St Eanswythe Church, Folkestone.  As far as we know, Cecil never lived in Folkestone, but had relatives who lived there.  A letter written by Mela on 27th October 1916 said that their cousin, Eva Money, had arranged to have Cecil’s name put on the list of “killed and died” who were prayed for at the Parish Church.

In his will, Cecil gave his address as Beverly, Frant Road, Tunbridge Wells, which was the home of his Uncle Harry, as his mother tended to live an itinerant life.