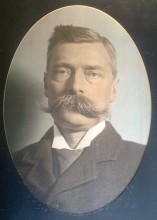 Frederick James Mourilyan (1846-1927), known as Fred, was the brother of Eugénie Sladden (née Mourilyan) who was married to Julius Sladden. As Eugénie and Julius were second cousins, Fred was also related to Julius, being his second cousin.

Fred was born at Sandwich, Kent, on 29th September 1846, the fourth of eight children of John Mourilyan, a solicitor, by his second wife, Mary Anna Wood.  He was baptized at St Clement’s, Sandwich, on 6th November 1846.  When Fred was about seven years old, the family moved to Paris.

Fred started work as a banker in Paris.  From 1869-1871 and then from 1873-1881, Fred lived and worked in Roumania.  According to Fred’s great-grandson. when Lloyds were looking for staff to help found the National Bank of Roumania, they wanted French speakers on the staff because the Roumanians realised that their own language would not be much use in the international arena, and Fred was one of those who was employed to go out there.  He was based initially in Bucharest but then from 1873 he was in Galati.

In 1872 Fred was back in England as he married Caroline Florence Gardiner on 27th June 1872 at Trinity Church, Worcester.  Florence and her family were living in Worcester at the time following their hasty escape from Paris, where they had been living, because of the Siege of Paris.

In the latter part of 1882, the Mourilyans moved to Brussels in Belgium.  Fred was by now working for for the Continental Gas Company. The Imperial Continental Gas Association had been formed in 1824 for purposes of lighting the principal towns of the Continent.  In Brussels, Fred and his family lived firstly at Rue des Drapiers and then at Rue du Châtelain, off Avenue Louise.

On the outbreak of the First World War, Fred and Florence had been visiting England, but Fred felt compelled to return to Brussels to see to his business.  However, the German occupation of Belgium meant that Fred was forced to escape and return to England.  His account of his journey through war-torn Belgium is detailed in a letter of 17th October 1914 to his sister.

The First World War changed everything and Fred was forced to abandon his home in Brussels and remain in England where he and Florence led an itinerant lifestyle, staying with various different relatives.  The war had a severe effect on the operations of the Imperial Continental Gas Company, especially in Germany where the state ordered the liquidation of the company’s property.  A number of the letters allude to the problems the company was facing, most notably Fred’s letters of 17th October 1914 and 24th December 1914.  Fred’s nieces and nephews expressed concern for his welfare in their letters of autumn 1914. Arthur Sladden in his letter of 17th October 1914, May Sladden in her letter of 21st October 1914 and George Sladden in his letter of 22nd October 1914 referred to the heavy financial loss it would mean for their uncle.

A number of Fred’s letters refer to the Hodson children, Amy, Arthur and Henry, who were trapped at the Belgian seaside on the outbreak of war, and their elder brother, Charlie, who had escaped from school and joined up, even though he was only 15; he was very concerned for their welfare in war-torn Belgium and worked hard throughout the war to offer assistance.  The Hodson children were Fred’s great-nephews and great-niece. Their mother, Annie de Salis Mourilyan, Fred’s niece, had married Fred’s friend, Ernest Rust Hodson, who sang in the choir with him at the Church of the Resurrection; Fred was one of the witnesses at their wedding in 1898.  Amy kept a diary throughout the war and Fred is mentioned on a number of occasions in the book:  “Miss Cavell was Shot, The Diaries of Amy Hodson 1914-1920”, edited by Monica Kendall (2015).

Fred and Florence suffered another tragedy after the war had ended when their only surviving son, Archie, committed suicide in 1920.

We are grateful to Chris and Julian Higman for providing a photograph of their great-grandfather, Fred Mourilyan.