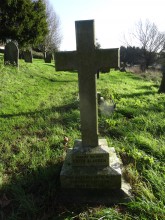 Edith Potter was born at Lydden, Kent, the third of seven children of Robert Potter, a farmer, and his wife, Emma.  She was baptised at St Mary the Virgin, Lydden, on 19th June 1844 but spent most of her childhood at Place House, Butter-Street Farm, Sibertswold (or Shepherdswell as it was also known), where her father farmed.  Robert died in 1862 and Lizzie and her widowed mother and siblings moved to 5 Brockley Villas, Brockley Road, Greenwich.

On 26th November 1873, Edith married fellow Kentish man, Francis Nixon Sladden, known as Frank, at St John’s, Deptford, Kent.    Frank was a farmer and, at the time of the 1871 census and at the time of his marriage, was living at Goss Hall House, Ash, in the home of his uncle, Thomas Coleman, who was a farmer and grazier of 610 acres employing 20 labourers and 7 boys.  Five years later, Edith’s younger sister, Lizzie, married Frank’s older brother, George, at the same church.

Frank died at Delph House in 1909.  After her husband’s death, Edith and Norah moved to Trouville, Middle Deal Road, Deal.

In 1917, Edith and her daughters moved to Evesham when Marian went into partnership with her cousin, May Sladden, at Greenhill School.  They had a house at Bengeworth.  By this time, Edith was struggling with her health – “a bad mental breakdown and has been quite peculiar” as Mela described it.  She felt that Edith was much altered and very frail looking, and was suffering from constant fits of depression.  In February 1918, Edith was taken to St Andrew’s, Northampton, a home for mentally affected people.  Her son, Tom, living in South Africa, wired home £50 which helped considerably, and her brother-in-law, Julius, also stepped in to help.

At some stage in the 1920s, Edith came to Badsey to live at Seward House.  Edith died in Worcestershire Mental Hospital, Barnsley Hall, Bromsgrove, on 24th February 1930.  She was buried alongside her husband three days later at St Nicholas, Ash, Kent.