I had not seen the paper until this morning since I’ve been in bed, although I’ve tried hard to get one.

This morning I had a Times sent me from the Head Office in London by an unknown friend, who, I think, must be either Kath or Jack. I knew there must be something of personal interest in it so I scanned its pages eagerly and found the important news of the advances on Kut. In my letter of yesterday, I wrote as though you would be spending a comparatively comfortable Xmas at the base and now today I hear your division is probably one of those in action. Well – I knew that great things were pending in the East but I hardly expected a move to be made this side of Xmas. However, if it had to come, the sooner it comes the sooner it will be over. Naturally I cannot help feeling anxious about you. I’d be very unfeeling if I didn’t, but at least this war has taught me that our anxiety indulged in willfully can be of no earthly use, and it is no use meeting troubles half way. When I last heard from you, you were in excellent health and spirits, and you are now a seasoned warrior and know exactly what the risks are and how best to use them. So at any rate you are well equipped for the fray.

In the background of your life you have the prayers of all of us at home and if God wills He will spare you to us and we can but submit our wills to His.

Through Cecil’s death I realize already how completely he had accomplished one of his chief aims in life and that was to bring our family into unity again. Mother is reconciled to me through him, to Aunt Jessie through him, and I believe his visit to Badsey last year was the beginning of her desire to know your home and people. Her first act, after she thought he was dead, was to go and see your Father, she told me she wishes she had known your Mother, which goes to prove that she wished to accomplish by her own act Cecil’s desire for ‘’peace’’. She told me in her letter that it was his greatest desire to be able to patch up all the family quarrels once and for all.

So we must try and hold what he strove to bring about; as Uncle Ben said in his letter we must live so that he may never be ashamed of us.

Although the doctor has diagnosed my illness as ‘’flu’’ I personally think I am suffering from the re-action from the strain of the past months. I haven’t a high temperature, only my pulse varies from 110 to 80 and so on and I feel used up. The ordinary influenza symptoms are entirely missing. However, the rest in bed is what is best for me so I’ll not grumble.

I had a long letter from Ethel today. She tells me they have heard that Arthur has influenza. The War Office wired to say he is in hospital with influenza and going on well.

What I say is ‘’Vote for Women’’! If a man gets influenza, a War Office telegram is considered necessary. If a woman has influenza, unless she mentions the fact in her letters, no one is any the wiser!

Ethel also says that Mrs Horsman is dying. Her throat is getting rapidly worse, the cancer taking an alarmingly rapid form. Ethel went with her to be examined and she was told that she, Mrs Horsman, may live 2 weeks or not more than 2 months. Ethel found out the names of some Nursing Homes, and Kath is arranging that Mrs Horsman should go to one and be properly nursed during her last days. Isn’t it pitifully sad for her children and for the man to whom she was to have been married? I only hope the end will not be very terrible. Kath is feeling it very much.

This is not a very cheery letter for you to receive in the trenches – but facts are facts and I know you like to be kept informed of all the news whether good or bad.

Ethel enjoyed her visit to Eastbourne. Jack went down there too. Aunt Lizzie seems to have been her very charmingist to them both.

Betty is glad to have Ethel back. She did the housekeeping in Ethel’s absence and has found it pretty hard work especially as she has to study a bit as well.

Muriel Thelwall is staying with Mrs Ashwin for Christmas, and Miss Allan has gone for a holiday.

I’ve rather lost the thread of my letter because Nurse came in to take our temps. Mine is only 98.6o, pulse 94 so it’s not so bad, considering I am sitting up in a chair today.

I have an idea it won’t be long now before you are back in old England.

The news from all fronts is good and Germany is practically starving. Statistics show that even the capture of the Rumanian wheatfields will not be of any great relief to her, as Austria and Hungary have also to be fed. The change of Cabinet roused great interest at home and the public is satisfied with the new War Cabinet, the majority are at any rate. The French victory at Verdun under the leadership of General Nivelle is brilliant, and a fatal blow for Germany. The German Crown Prince was conspicuous by his absence!

I mustn’t write any more tonight, my darling.

My thoughts are constantly with you and when you have breathing space to think, I’m sure your thoughts wing homeward to all of us at home in England. I feel very proud to think you have taken such a useful and active part ever since war began. We know more about you and your action than you tell us in your letters, from men who’ve come home. I am very proud of you.

With all my heart’s love and a great big kiss. God bless you and guard you, dearest.

Ever your devoted
Mela 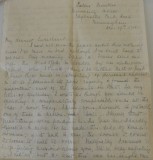 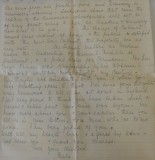