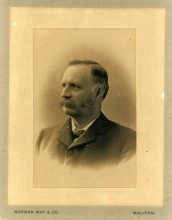 Julius Sladden was born at Ash near Sandwich in Kent on 25th June 1847, the fifth of six children of John Sladden, a surgeon, and his wife, Elizabeth.  He was baptized in St Nicholas’ Church, Ash, on 1st August 1847.

Julius was educated at the Royal Medical Benevolent College, Epsom, Surrey, from 1859-1864.  The school had been founded in 1855 with the aim of providing a “liberal education” to a hundred sons of “duly qualified medical men” for £25 each year.  The school included both Foundationers paid for by the College and Exhibitioners who paid full fees.

At the age of only 14, Julius gained a prize at the prestigious Brighton and Sussex Floricultural and Horticultural Society held at the Royal Pavilion, Brighton.  In Division I category, open to all England, Julius won £1 for “Dahlias, 12 dissimilar blooms”.  Throughout the 1860s, he continued to exhibit at the Brighton Show.

On leaving school, Julius became a brewer.  This may possibly have been at Gardner’s Brewery in Ash, where he grew up, as the parish workhouse had been converted into a brewery in 1837; the firm claimed to be the originators of pale ale brewing in East Kent.  Or he may have begun work with his uncle, John Noakes Coleman (his mother’s brother), who had a brewery at Great Mongeham, which had been in the Noakes family for at least two generations.

By 1871, Julius had moved to Oxfordshire and was manager of a brewery in Chipping Norton; he lived on Back Lane, off Brewery Lane, and lived alone with one housekeeper.  Julius continued with his horticulture and became a prominent member of Chipping Norton Rose Society.

On 15th December 1877 at the British Embassy in Paris, Julius married Eugénie Narcisse Mourilyan.  Eugénie’s family was from Kent, although she had spent much of her childhood in Paris where her father was a solicitor.  Julius returned to Chipping Norton with his new wife.  Their firstborn child, John Dilnot Sladden, was born at Chipping Norton on 19th November 1878.

In April 1879, Julius and family moved to Badsey as Julius was now working in Evesham at Sladden & Collier Ltd.  The Sladdens rented Seward House in the High Street and, in 1903, after having lived in there for 24 years, Julius had the opportunity to buy the house and orchard opposite for £1,430.  He was to remain at Seward House until his death in 1928.

Julius quickly became involved in local affairs.  He became a member of the Conservative and Unionist Association in Evesham in 1880 and Chairman from 1908.  He was a Ruling Councillor of the local branch of the Primrose League (an organization founded in 1883 for spreading Conservative principles).  He was a member of Worcestershire County Council from 1902 and Chairman of Badsey Parish Council, a member of the Worcestershire Standing Joint Committee and was a Commissioner of Income Tax.  He served for a short period on the Evesham Town Council and was a prominent Freemason, Past Master of the Abbot Lichfield Lodge in Evesham in 1911 of which he was one of the founders.

It was largely thanks to Julius’ efforts that Badsey acquired its recreation ground and he became Chairman of its Management Committee.  He took a keen interest in sport and was president of Badsey Rangers’ Football Club which had been formed in 1890.

Probably inspired by the Brighton Flower Show and by similar shows in the Chipping Norton region, Julius Sladden suggested a similar event for Badsey.  The suggestion was quickly taken up, a committee formed, and on 25th July 1888, the first Badsey, Aldington and Wickhamford Flower Show was held – an important event in the village calendar which is still held to this day.  The Sir Julius Sladden Challenge Cup is awarded annually to the person with most points in show.  He was also interested in the Vale of Evesham Asparagus Growers’ Association.  His chief hobby was rose-growing and he delighted in showing visitors his garden at Seward House.

But paramount among his activities was Julius Sladden’s concern for St James’ Church, Badsey.  He keenly supported the restoration of the church in 1885.  He served as people’s churchwarden 1882-91 and a Vicar’s churchwarden from 1901 until his death.  He read the lessons at church and was Vice Chairman of the Parochial Church Council.  After the death of his wife, Eugénie, he was responsible for the placing of a stained-glass window in the chancel in her memory.

Julius Sladden was named in the New Year’s Honours List for 1926 for political and public services and received his knighthood at Buckingham Palace on 5th February 1926.

Sir Julius continued to play an active part in the brewery business until it was sold in 1927 to the Cheltenham Original Brewery Company.  Most mornings he was to be found at either his office in High Street, Evesham, or at the brewery.

Sir Julius died at Seward House on 21st December 1928.  St James’ Church, Badsey, was packed for his funeral on 27th December, and not everyone was able to gain admittance.  His sons and daughters panelled the church walls in his memory, using the oak timber which originally formed part of the box pews which were dismantled in 1885 and a memorial inscription was placed on the east wall of the aisle.

Also see
Letters from Julius Sladden (1847-1928), the patriarch of the family
Letters mentioning this person: