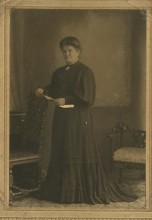 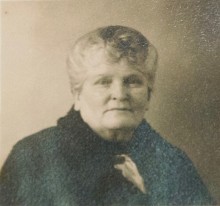 Clara Wall was born on 7th December 1866 in Lucknow, India, the sixth of seven children of Joseph Wall and his wife, Madeline (née Dalby).  She was baptized on 25th June 1867.  Her father, a schoolmaster at La Martinière College, Lucknow, was from Cheltenham originally, but moved to India in the 1850s where he married 15-year-old Madeline Dalby in Benares.  Joseph was one of seven staff at the school who was awarded the Indian Mutiny Medal in 1858 for his parts in the defence of Lucknow from 29th June to 22nd November 1857.

Clara was aged only three when her father died; her mother remarried when Clara was ten years old.

On 8th February 1887 at Lucknow, Clara married Albert Edward Brown Constable who was curate of the mission at Allahabad.  Albert had grown up in Cheltenham, but whether they met in Cheltenham (where some members of Clara’s father’s family still lived) or India is not known.  Clara and Albert had four children:  Alice Amelia (1887-1951) known as Mela, John Cecil (1889-1916) known as Cecil, Wilfred Neville (1891-1945) and Barbara Evelyn Mia (1895-1976).  Mela and Cecil were born at Allahabad, India.  Wilfred was born at Normanby in Lincolnshire as the Brown Constable family had returned to England in May 1890, when Albert was appointed by the Bishop of Lincoln to Claxby with Normanby in Lincolnshire.  At the end of 1893, the Brown Constables returned to India, where Albert was chaplain at Pachmarhi, Jubbulpur, Nagpur.  Barbara was born there in 1895.

The relationship between Albert and his wife was not easy, and Clara spent increasing amounts of time returning to England with the children who were educated there.  At the time of the 1901 census, Clara was living at 18 Faraday Mansions, Fulham, with her four children  whilst Albert was in India as Chaplain to the India Forces.  Shipping records reveal, however, that she made several trips between England and India.

By 1911, Clara and Albert were living separately, Clara boarding in Christchurch and Albert living at Regina Priory, West Ealing.  Clara continued to live a fairly itinerant life, dividing her time between France and England.  Despite being close to the war zone, she spent much of the war in Boulogne-sur-Mer.  From the summer of 1917, she rented Riverswood House, Marlow.  She returned to France after the war.

In her declining years, Clara went to live with her daughter, Mela, and son-in-law, Cyril Sladden, who was a housemaster at Eton College.  Clara died on 8th December 1934 at Westbury, Eton College.