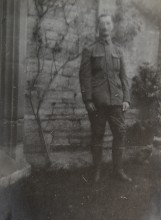 George Mourilyan Sladden (1886-1948) was the sixth child of Julius and Eugénie Sladden.

George was born on 30th January 1886 at Seward House, Badsey, and baptized on 18th April 1886 at St James’ Church, Badsey.  He was educated at Bancroft’s School, Woodford, Essex.

On leaving school, George joined the Civil Service in London.  At the time of the 1911 census, George was working as a junior clerk in the ecclesiastical division.  He shared a house with his siblings, Jack, Kathleen and Cyril, living at 94 West Hill, Sydenham, and then at 43 Peak Hill, Sydenham.  In mid 1910 the siblings moved to 12 Charleville Circus, Sydenham, where they lived for a number of years.

On the outbreak of war, George, who was in the Territorial Army, Civil Service branch, was mobilized and spent most of the war in France with the Civil Service Rifles, Transport Section.

In December 1915 George became engaged to Rosina Beatrice Lintott (known as Rosie) whom he had met through a colleague in the Civil Service Rifles, John Edward Lintott, who was Rosie’s uncle.  Rosie was 18, nearly 12 years younger than George.  They had known each other for over a year by the time they became engaged, but the family did not know about Rosie’s existence until George broke the surprise news in a letter of 27th November 1915.  Not all of the family was approving.  Rosie was just a month or two older than Juliet, George’s youngest sister.

George returned to England from France at the end of October 1918.  It seems that the couple broke off their engagement early in 1919.  They were certainly still together as at November 1918 as Mela Brown Constable speculated whether Rosie and George would be married before herself and Cyril, although Kathleen had got the impression that there was no hurry for them to get married.

George later came to know Mary Marjorie Ford, known as Peggy, via his sister, Juliet, as the two were close friends as students at Bedford College, London.

George died at Durham on 14th August 1948 and his ashes are at Badsey.  After his death, George’s widow, Peggy, came to live at Seward House, until the death of Juliet, the last of the main Sladden family, in 1984.  The house was sold and Peggy went to live in Devon. George’s only son died in London and his ashes were also buried in the family plot, as also were those of Peggy, who died in Devon in 1992.