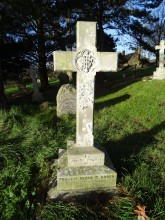 Francis Nixon Sladden (1843-1909), known as Frank, was the elder brother of Julius Sladden.

Frank Sladden was born at Ash near Sandwich in Kent on 30th July 1843, the third of six children of John and Elizabeth Sladden.  He was baptized at St Nicholas’ Church, Ash, on 3rd September 1843.

Frank went into farming on leaving school.  In 1871, he was living at Goss Hall House, Ash, in the home of his uncle, Thomas Coleman, who was a farmer and grazier of 610 acres employing 20 labourers and 7 boys.

Frank and Edith and had three children:  Norah (1874-1955), Thomas Coleman (1875) and Edith Marian (1877-1932).  All three children were born at Ash and baptized in the Church of St Nicholas.  Frank was by now living at Guston Farm House, Ash (part of the Goss Hall estate).  Together with his uncle, Thomas Coleman, he farmed 700 acres, employing 21 labourers and four boys.

In October 1897, Frank gave up farming and moved with Edith to Delph House, Delph Street, Sandwich, with just Norah at home.

On 17th December 1904, Frank and Edith, together with their siblings, George and Lizzie Sladden, set sail from New South Wales, Australia, bound for Wellington, New Zealand, to go and visit Frank and George’s brother, Dilnot.  After spending a few months there, they set sail from New South Wales on 15th April 1905 bound for London; Norah was now travelling with them.