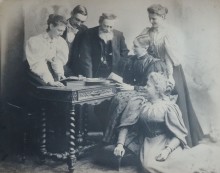 The Robinson family c1897, with Anna on the right (photo by kind permission of Jenny Gosney and Richard Walton).
Known As
Anna
Biographical Details

Anna Magdalene Gillio, née Robinson (1875-1942) was the niece of Eugénie Sladden, being the daughter of her sister, Mary Anna Robinson, and was the cousin of Jack, May, Kathleen, Ethel, Arthur, George, Cyril and Juliet Sladden.  Anna is mentioned in most of the letters written by her mother, Mary Anna Robinson, and also in some written by her cousins.

Anna was born on 19th June 1875 at Marshgate House, Richmond, Surrey, the third of four children of Frederick Dalgarno and Mary Anna Robinson.  She was baptized on 22nd July 1875 at St Mary Magdalene, Richmond.

On 3rd April 1907 at St Mary Magdalene, Richmond, Anna married Joseph John Gillio, an Italian mining engineer.  In December 1907, a son, Frederick Joseph, was born, but he died a few months later in 1908.  Joe was probably working in East Africa at this time as shipping records reveal that Anna sailed from Southampton on 9th December 1908 for Kilindini, Kenya.

A second son, Francis Dalgarno (known as Dalgarno), was born in 1911 at Folkestone, Kent.  At the time of his birth, Anna was living at 105 Cheriton Road, Folkestone.  Her husband was away from home, but her mother was staying and, in addition to a cook and a housemaid, she had a nurse, Mary Kate Kirton.

Before the war, Anna would sometimes spend the winter months abroad as she did in early 1914 when she rented a place in Menton in the Alpes Maritimes region of France.  She then rented Carlisle House, 8 Cheriton Place, Folkestone, but seemed to have an itinerant life as in the following months she stayed in Weymouth, the Lakes and Malvern.  She had at this point let her own house for a year.  On the outbreak of war, Anna and Dalgarno moved in with her mother at Marshgate House, Richmond, but then seemed to alternate her time between there and Folkestone.  Her husband, Joe, was working in the Belgian Congo.  A letter of 28th February 1915 from Mary Anna Robinson to her sister reveals that Anna was unable to receive any of Joe’s salary as the Belgian Government was unable to pay it at that time.  Mary Anna felt it was very fortunate that Anna’s house was let for another year as she got a very good rent for the house, and she would only want more servants if she lived there.

Anna’s son, Dalgarno, pre-deceased her.  By the time of the Second World War, Anna was living at Rowanhurst, Emsworth Road, Havant, Hampshire.  She died on 20th April 1942 at The War Memorial Hospital, Havant, leaving effects of £10,752 0s 2d.  Her husband died the following year in Kampala.