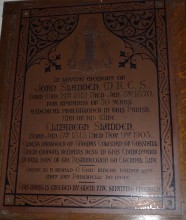 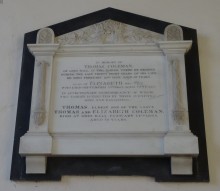 Elizabeth Coleman was born on 8th January 1815 at Eythorne, Kent, the eldest of five children of Thomas Coleman and his wife, Elizabeth (née Noakes).  She was baptised at Eythorne on 16th May 1815.  By the time Elizabeth was four years old, the family had moved to Goss Hall, a large farmhouse on the outskirts of Ash-next-Sandwich, where her father farmed 340 acres.

Elizabeth remained living in Ash with her only daughter, Charlotte, for over 20 years after her husband’s death.  When Charlotte married at the age of 43 in 1893, Elizabeth went to live with her daughter and new son-in-law, John Hayward, at their home, 26 Radnor Park Road, Folkestone.

Elizabeth died on 9th November 1903 at Radnor Park Road, Folkestone.  She was buried four days later at Ash alongside her husband.  After the death of their mother, their children arranged for a plaque to be placed in the church at Ash:

In loving memory of John Sladden MRCS, born Mar 14th 1812, died Jan 3rd 1870, for upwards of 30 years a medical practitioner in this parish and of his wife Elizabeth Sladden, born Jan 8th 1815, died Nov 9th 1903, eldest daughter of Thomas Coleman of Goss Hall, their mortal remains rest in this churchyard in full hope of the resurrection to eternal life.

There is a world O God where human lips may say farewell no more.

This brass is erected by their five surviving children.

There was already a family tradition of placing memorials in the church as, some years earlier, a plaque had been erected in the church by Elizabeth and her siblings in memory of their parents:

In memory of Thomas Coleman of Goss Hall in this parish, where he resided during the last thirty-eight years of his life, he died February 23rd 1856, aged 67 years.  Also of Elizabeth his wife who died September 29th 1863, aged 78 years.  In affectionate remembrance of whom, this table is erected by their surviving sons and daughters.

Appended at a later date was the following inscription: