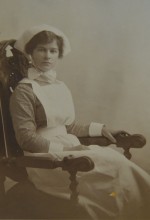 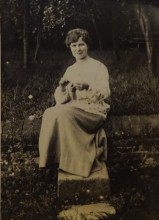 Alice Amelia Brown Constable (1887-1951), known as Mela, was the fiancée of Cyril Sladden.

Mela Brown Constable was born on 31st December 1887 in Allahabad, Bengal, India, the eldest of four children of Albert Edward Brown Constable and his wife, Clara Emily (née Wall).  Mela was baptized six days later at All Saints Cathedral, Allahabad.  Her godfather was Brook Deedes, the chaplain at All Saints; Mela’s father worked as his assistant.

It is pure speculation, but one wonders whether the young Alice Amelia came to be known as Mela after the Kumbh Mela which is a mass Hindu pilgrimage of faith in which Hindus gather to bathe in a sacred or holy river.  Traditionally, four fairs are widely recognized as the Kumbh Mela, held in rotation, one of which is at Allahabad held every 12 years.  But would a Christian minister give his baby daughter a Hindu name?

When Mela was 2½ months old, the family went to live in England when Albert was appointed as Curate at Normanby, Lincolnshire.  At the end of 1893, the Brown Constables returned to India.  Throughout her childhood, Mela spent some of the time in India and some in England.  Her parents separated in the early 20th century and, at the time of the 1901 census, Mela was living with her mother and siblings at 18 Faraday Mansions, Fulham.

In 1911 Mela was working as a nurse at Bournemouth, Hampshire.  At some stage she came to Badsey to act as lady companion to Mrs Gwenelin Ashwin of Pool House.  It is assumed that it was whilst living with Mrs Ashwin that Mela got to know the Sladden family who lived across the road at Seward House.

By 1913, Mela was working as governess to the children of the Reverend Sturges-Jones, Vicar of St Peter’s Church, St Leonards-on-Sea.  It was whilst working there that Mela became engaged to Cyril Sladden in May 1913.

Mela did not enjoy her time at St Leonards so then moved to work for the Japp family who lived at 7 Vanburgh Park, Blackheath.  She remained there until about the summer of 1914.  She was staying with relatives in Folkestone when war broke out, but then went to live at Seward House.

Having undertaken training as a nurse, Mela felt that her services might be needed so, at the beginning of September 1914, she wrote to Birmingham to see if there was any opening at the hospital there.  Two days later, she had heard back from the Matron of the Birmingham General Hospital to say that she was taking probationers for one year during the present crisis but there would be no payment on either side.  With help in the form of an allowance from her aunt and uncle, Benson and Jessie Wall, Mela was able to take up an appointment at the General Hospital in mid October.

After six months in the job, Mela left the General as she had been offered a job at Bournbrook, the 1st Southern General Hospital in Birmingham.  But first she was granted leave and started work at Bournbrook on 1st June where she stayed until February 1916.  Due to trouble with varicose veins, Mela resigned from her job at the hospital for a time.  She undertook private nursing for Dr Leslie in the Evesham area, then moved to Oxton near Birkenhead to stay with her aunt and uncle, Benson and Jessie Wall.

Mela returned to work at the 1st Southern General Hospital in September 1916.  Her letters give lively accounts of her work and of her colleagues.  In September 1917, Mela joined the newly-formed Women’s Army Auxiliary Corps (which later became the Queen Mary’s Army Auxiliary Corps).  She was very quickly appointed as a Unit Administrator, which was gazetted on 2nd November 1917 as from 3rd September.  In that capacity, she was sent to several different places to work and was awarded the MBE after the war.

After nearly four years of separation, Cyril Sladden returned to England in March 1919 and plans were made for their wedding.  The following announcement appeared in the press:

A marriage will take place at All Saints’ Church, Marlow, on May 3rd, between Major C E Sladden, DSO, MC, 9th Worcesters, son of Mr J Sladden, Badsey, Evesham, and Alice Amelia (Mela), elder daughter of the Rev A E and Mrs Brown Constable, and granddaughter of the late Colonel Charles Brown Constable of Cheltenham, and Wallace Craigie, Dundee, JP, DL, Forfarshire, and of Mr J Wall of Cheltenham and Lucknow, India.